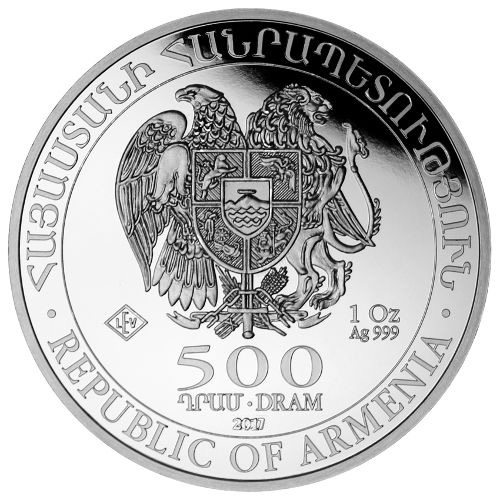 Armenian Silver Noahs Ark coins were first introduced in 2011 as 1 oz. silver bullion coins, which were legal tender in the nation of Armenia. That introductory year also included a oz and oz fractional weight option in the series, with subsequent expansions of the program in 20012.

The 1 oz Armenian Silver Noahs Ark coin is currently the most popular weight in the program, with mintage that far surpasses the other six weights available across the silver range. The introductory year saw sales of 268,325 in this weight, with a nearly 5-fold increase as of 2015 to 960,182 coins sold.

Each 2017 1 oz Armenian Silver Noahs Ark coin in this listing is in BU condition. Coins in this condition exhibit no signs of wear and tear, though you may notice minor flaws ranging from breaks in the luster and spotted surfaces to contact marks from the coining process.

On the reverse of the Armenian Silver Noahs Ark coin youll find the imagery commonly described in the Genesis flood narrative from the Christian bible. Noahs Ark is said to have floated on the flood waters for 40 days, eventually coming to rest on Mount Ararat after a dove returned to the ship with an olive branch in its beak.

The obverse of all 2017 1 oz Armenian Silver Noahs Ark Coins includes the coat of arms for Armenia. In the center of the shield is a depiction of the biblical tale, with a small ark clearly visible atop Ararat and flood waters below. To the left of the shield is an eagle, while the right boasts a lion.

If you have any questions, please dont hesitate to ask. JM Bullion associates are available at 800-276-6508, online through our live chat and via email address.