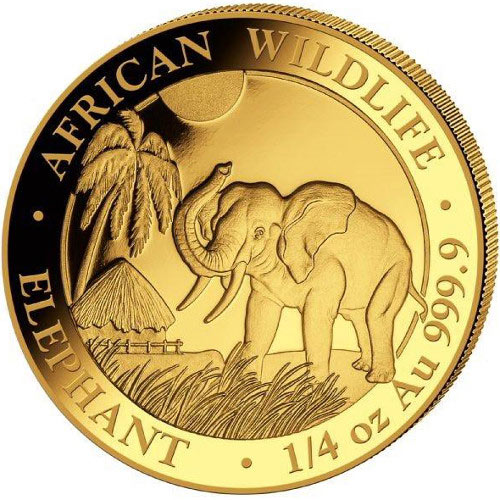 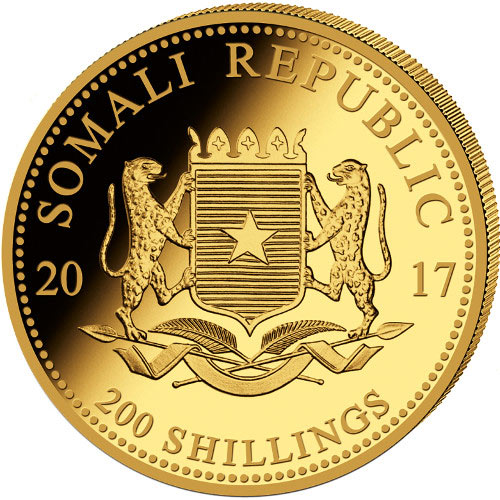 The expansion of the Somalia Elephant Series continues in 2017 with the release of new weights in both gold and silver versions of the coin. Available annually in gold, silver, and platinum, these coins now have new weights for investors and collectors to choose from each year. Right now, the 2017 oz Somalia Gold Elephant Coin is available as a BU specimen from JM Bullion.

This isnt to discredit its cousin the forest elephant, which itself weighs in as the third largest land mammal. Elephant populations have, at times, been pushed to the brink of extinction because of poaching. The tusks of elephants are made of ivory, which has been highly coveted throughout human history, though illegal today.

On the obverse of all 2017 oz Somalia Gold Elephant coins is the new common design for the series, which features an elephant standing in the foreground amidst a patch of Savannah grass. In the background, the sun rises above a small hut that exists in the shade of a single palm tree.

Each 2017 oz Somalia Gold Elephant coin in this issue is a first-ever release for its weight in the program, and available as a BU specimen. Coins in this condition exhibit no signs of wear and tear, but may feature breaks in the luster, spotted surfaces, or contact marks from the coining process.

The Bavarian State Mint is responsible for the coining of Somalia Gold Elephants. The mint opened in 1158 in Munich, and today is owned by the government of the Free State of Bavaria.

If you have questions, JM Bullion customer service is available to help. You can reach us on the phone at 800-276-6508, online using our live chat, and via our email address.