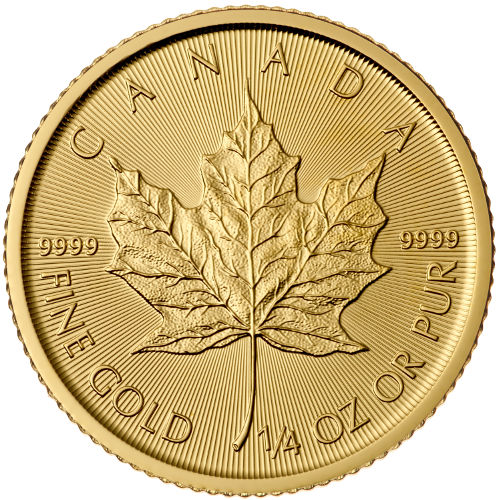 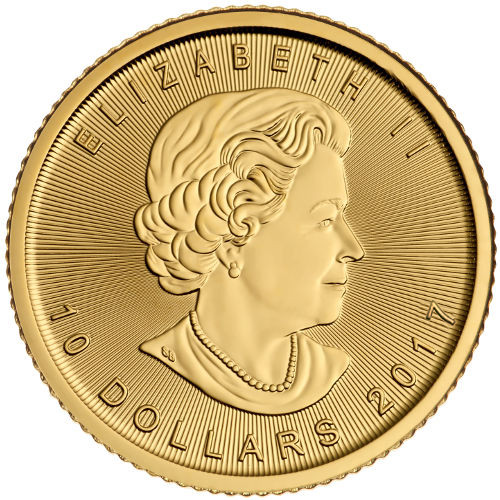 The Canadian Gold Maple Leaf is available in a variety of weights and finishes. The bullion version of the coin is the most popular among investors, offering an affordable option for any wealth level. Some of the best options are the fractional-weight coins, of which there are four to choose from each year. Today, the 2017 ¼ oz Canadian Gold Maple Leaf Coin is available to you from JM Bullion.

On the reverse of the 2017 ¼ oz Canadian Gold Maple Leaf coin you’ll find the sugar maple leaf design that has appeared on the coins since their 1979 introduction. The maple leaf is the national emblem of Canada, appearing on its national flag, and was created for this coin by RCM engravers.

The obverse of all Canadian Gold Maple Leaf Coins features the right-profile portrait of Queen Elizabeth II. From 1979 to 1989, an image of the 39-year-old Queen appeared on the obverse, followed by a 64-year-old depiction from 1990 to 2004. Susanna Blunt designed a new portrait of Her Majesty in 2003 that debuted on the Gold Maple Leaf in 2005 and continues to this day.

Canadian Gold Maple Leaf coins were the first coins other than the South African Krugerrand offered as gold bullion investment products for private purchasers. The economic boycott of South Africa, due to its apartheid system, led to a ban on the import of Krugerrands in many other countries. The Canadian Gold Maple Leaf filled that void and has grown in importance over the decades.

Each 2017 ¼ oz Canadian Gold Maple Leaf Coin in this listing is in BU condition. Coins in BU condition have no signs of wear and tear, however you may notice minor flaws in its finish including breaks in the luster, spotted surfaces, and contact marks from the production process.

The Royal Canadian Mint was founded in 1908. It continues to operate its original facility in Ottawa, the federal capital city, as well as a new secondary location in Winnipeg that opened in the 1980s.

Please direct your questions to a JM Bullion associate on the phone at 800-276-6508. You can also reach out to us online through our live chat and email features.