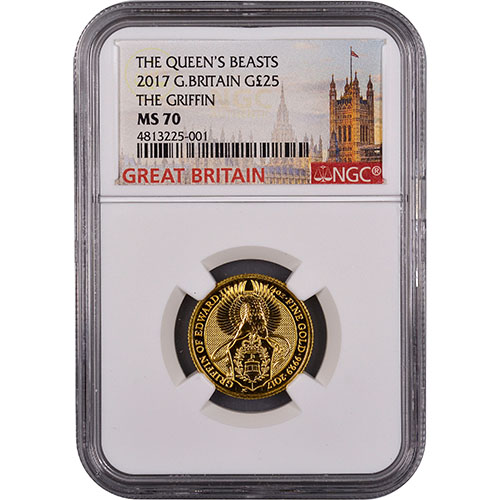 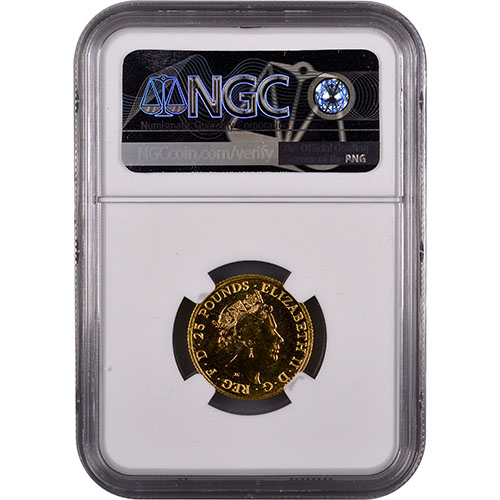 One of the most fearsome beasts of ancient mythology was the Griffin. This combination of the worlds most powerful bird and its most powerful land mammal was seen as the ultimate symbol of power, courage, and strength. Its no wonder why King Edward III would choose such a beast for his private seal. Right now, 2017 oz British Gold Queens Beast Griffin Coins are available to purchase online from JM Bullion in perfect condition!

Each 2017 oz British Gold Queens Beast Griffin Coin available here today is in perfect condition as certified by the NGC. Coins with a Mint State 70 certification exhibit full, original mint luster and bear no detracting flaws on either the surface areas or design elements of the coin.

The Queens Beast Series of silver and gold coins for sale from the Royal Mint debuted in 2016 with the Lion of England. Each of the 10 heraldic beasts slated for release in this program comes to the Royal Arms now representing Queen Elizabeth II through a different monarch stretching over hundreds of years of British history.

For the Griffin of Edward III, a powerful symbol of courage and strength is found in the collection. This mythical beast was part eagle and part lion, bearing the head, wings, and front leg talons of an eagle, the king of the birds. The body, tail, and hind legs were those of the lion, the king of the beasts.

On the reverse of the 2017 oz British Gold Queens Beast Griffin Coin is a depiction of Edward IIIs Griffin. Curiously enough, as most overlook, the Griffin of Edward III is a female griffin as the males in the species have no wings. The Griffin is featured with a shield that bears a crowned tower representing the tower in which Edward III was born.

If you have any questions, please dont hesitate to ask. JM Bullion customer service is available to you on the phone at 800-276-6508, online using our live chat, and via our email address.