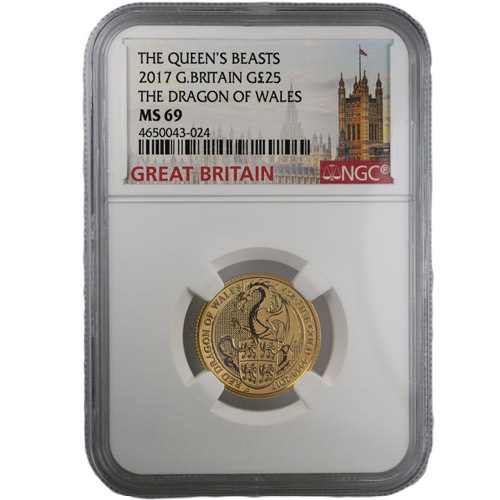 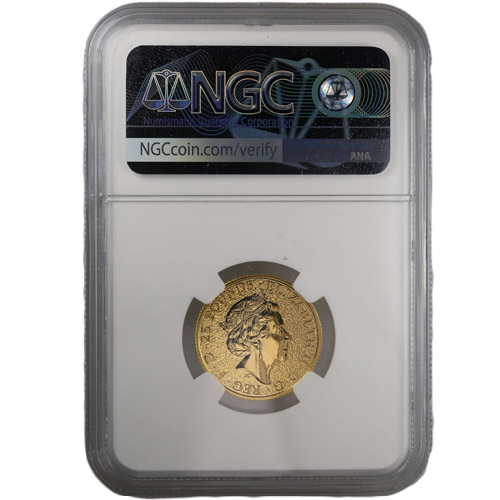 The Queens Beast Collection from the Royal Mint is a stunning 10-design issue that features both silver and gold bullion coins for sale. The gold coins are available in two different weights: 1 oz and oz. The 2017 oz British Gold Queens Beast Dragon Coin is available to you for purchase online today from JM Bullion.

In total there will be 10 coin designs issued in the Queens Beast Series. These coins launched in 2016 with the Royal Mints first-ever 2 oz silver bullion coin, as well as the aforementioned gold options. In 2017, the program expanded to feature the same bullion designs on a 1 oz platinum coin with 10 oz silver coins also introduced.

For the third release in the design series, the Red Dragon of Wales is featured. This followed the Lion of England as the first design, and the Griffin of Edward III. The Red Dragon is a popular design that today also happens to feature on the national flag of Wales, which itself is part of the United Kingdom.

On the obverse of the 2017 oz British Gold Queens Beast Dragon Coin is the fifth-generation effigy of Queen Elizabeth II. Created in 2015 by Royal Mint Engraver Jody Clark, it depicts the Queen at age 89. Clark was just 33 years old at the time, making him the youngest engraver to complete Her Majestys portrait of British coinage.

The reverse of the British Gold Queens Beast Dragon Coin includes the Red Dragon of Wales. The dragon depicted in this series is based upon the coat of arms of Llewelyn ap Griffith, the last native prince of Wales. It was later used by Henry VIII on his ships with a red dragon on green and white.

All 2017 oz British Gold Queens Beast Dragon Coins in this listing are near-perfect specimens from the NGC. Coins with a Mint State 69 certification showcase full, original mint luster with a maximum of two minor detracting flaws. These flaws are limited to minuscule hairlines or contact marks.

We encourage JM Bullion customers to contact us with questions. You can reach out to us on the phone at 800-276-6508, chat with us live online, or simply send us an email with your inquiries.