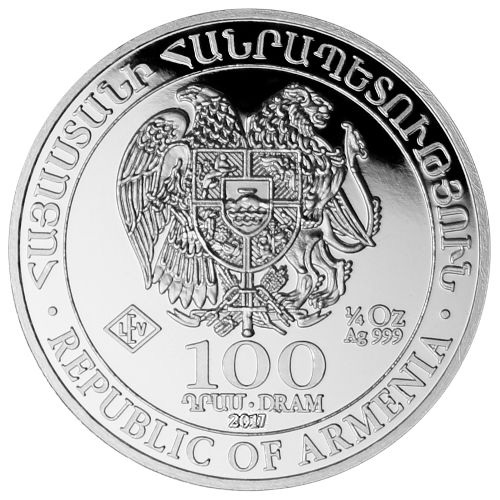 In the Christian bible, the book of Genesis speaks of a massive flood that wipes out the majority of humanity on the planet. God chose only Noah and his family to survive, tasking them with the construction of an ark and the collection of two of every animal on the planet. This image is captured brilliantly on the 2017 oz Armenian Silver Noahs Ark Coin, which is now available from JM Bullion.

Few silver bullion coin programs are issued for one country, with legal tender status, by the mint of another country. However, such is the case with the Armenian Silver Noahs Ark. Debuting in 2011, these coins are struck in Germany at the Geiger Edelmetalle facilities and available in two fractional weights, a 1 oz weight, and 5 oz, 10 oz, 1 Kilo, and 5 Kilo options, as well.

All 2017 oz Armenian Silver Noahs Ark coins available from JM Bullion are in BU condition. Coins in this condition have no signs of wear and tear, however you may notice minor flaws that include breaks in the luster, spotted surfaces, and contact marks.

The reverse of the Armenian Silver Noahs Ark coin depicts the scene as Noahs Ark rests atop the flood waters and the sun finally rises after the storms. Peaking over Mount Ararat, the sun signals that the end is near for those in the ark, as a dove flies into the foreground with an olive branch in its beak.

On the obverse youll find the coat of arms for Armenia. This image includes a small depiction in the center of the shield of the Noahs Ark tale, along with an eagle on the left and a lion on the right of the nations heraldic shield.

We encourage you to contact JM Bullion customer service with questions. Were available at 800-276-6508, online using our live chat, and via our email address.