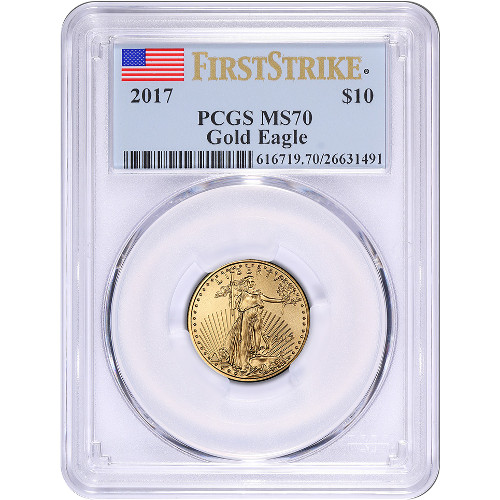 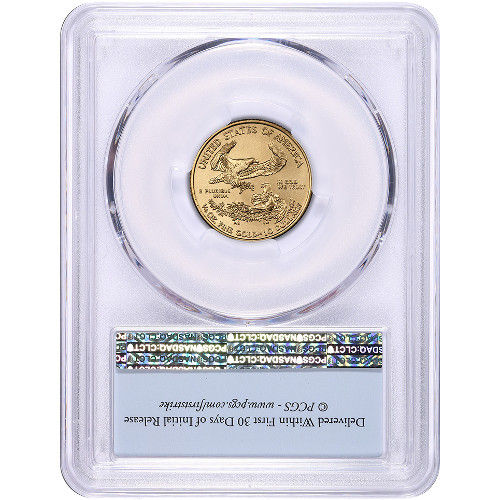 First Strike is a designation used for coins received within a particular window of time. The coins must arrive at the PCGS or an approved third-party depository within the first 30 days of the release date for 2017 American Gold Eagles as set by the US Mint.

Augustus Saint-Gaudens is one of the most famous coin designers in American history. He was personally chosen by President Theodore Roosevelt to revive the designs of American gold coins in 1905. The first of his designs to appear on a coin was that of Lady Liberty, which appeared on the $20 Gold Double Eagle from 1907 to 1933.

His original image has been updated three times in its history. The motto In God We Trust was added to his original design by an act of Congress. The 1907 coins featured only 46 stars, and the number was increased to 48 in 1912 to mark the addition of New Mexico and Arizona to the Union. For the American Gold Eagle, his design was updated to feature 50 stars, recognizing the addition of Hawaii and Alaska to the Union following World War II.

On the obverse face of every American Gold Eagle is the image of Lady Liberty. First created by Augustus Saint-Gaudens in 1907, this image depicts Lady Liberty leading the nation into an unknown future.

The reverse of 2017 oz American Gold Eagle coin designs used exclusively on the American Gold Eagle. Created by Miley Busiek in 1986, the depictions offers a glimpse at a family of nesting bald eagles. As the male flies over the nest, a female keeps a close watch of the hatchlings in the nest.

If you have any questions, please feel free to contact JM Bullion at 800-276-6508, connect with us online through our live chat, or email us.