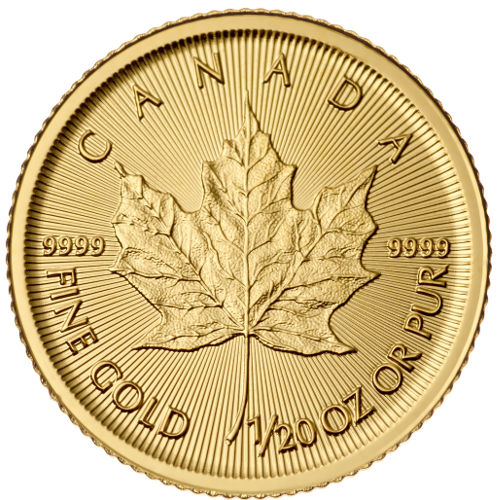 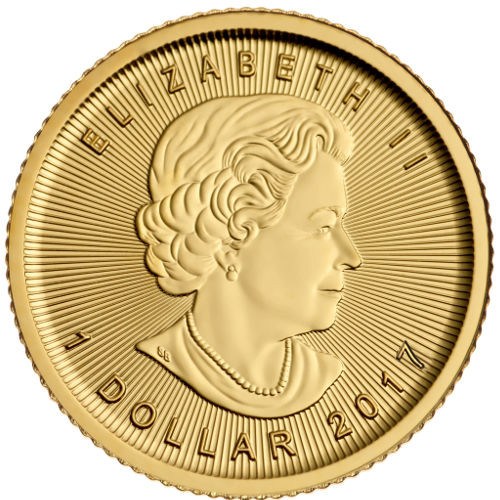 Each 2017 1/20 oz Canadian Gold Maple Leaf Coin available here is in BU condition. Coins in BU condition show no signs of wear and tear, though you may notice minor flaws such as breaks in the luster, spotted surfaces, or contact marks from the striking of the blanks during the production process.

On the obverse of all 2017 Canadian Gold Maple Leaf Coins you’ll find the image of Queen Elizabeth II. Her Majesty’s right-profile portrait on these coins was created by Susanna Blunt in 2003, and is the third-generation image of the Queen to appear on the Gold Maple Leaf.

The reverse of the 2017 1/20 oz Canadian Gold Maple Leaf Coin you’ll find the sugar maple leaf, the iconic official emblem of the nation. Modern Canadian Gold Maple Leaf coins also feature micro-laser engraved radial lines to combat counterfeiting and a maple leaf mark with the year of issue engraved inside of it and visible only under magnification.

Founded in 1908, the Royal Canadian Mint is the official sovereign mint of Canada. The mint was opened in Ottawa to help the nation strike its own coins independently without the aid of the Royal Mint in London. Today, an additional facility exists in Winnipeg that was opened in 1980 to help expand capacity.

We encourage all JM Bullion shoppers to reach out to us with questions. You can reach our customer service team on the phone at 800-276-6508, online using our live web chat, and via our email address.