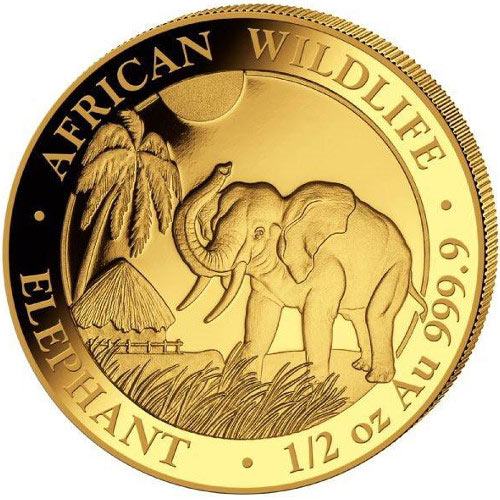 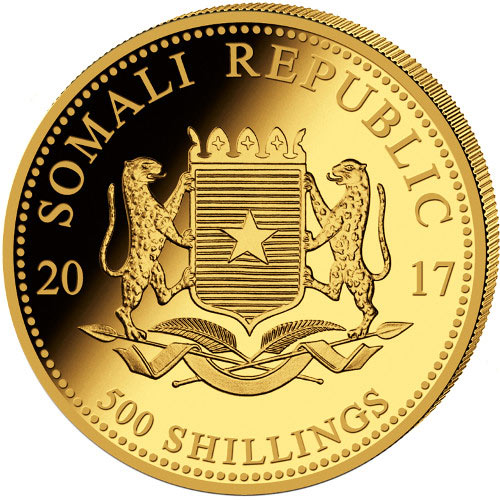 For the 2017 release of Somalia Gold Elephant coins, the Bavarian State Mint has expanded its offering to include two new fractional-weight coins. This expansion adds to the variety of the series and makes it easier for any investor or collector to get their hands on these popular coins. The 2017 oz Somalia Gold Elephant Coin is available today from JM Bullion with a BU grade.

Somalia Gold Elephant coins originated from the Bavarian State Mint in 1999 as silver coins issued for the nation of Zambia. From 1999 to 2003 this remained the norm, but in 2004 the mint shifted to Somalia as the nation of issue.

Over time this program has expanded to include a variety of bullion and proof coins. Today, the Bavarian State Mint offers Silver Elephants in eight weights, a new Platinum Elephant as of 2016, and now a more diverse offering of 2017 Somalia Gold Elephants.

The reverse side of the 2017 Somalia Gold Elephant coin bears the image of the nations coat of arms. It is accompanied by engravings that identify the nation of issue, the year of issue, and the coins individual face value.

On the obverse of all 2017 oz Somalia Gold Elephant Coins youll find the all-new design for this years release. It features a single elephant standing among the grasses of the Serengeti, with a native hut and palm tree standing in the background.

This is the first-ever release of the 2017 oz Somalia Gold Elephant, which joins the program in 2017 along with the oz Somalia Gold Elephant. Each one of these coins is a BU specimen. Coins with a BU grade feature no signs of wear and tear, but may feature minor flaws such as breaks in the luster, spotted surfaces, or contact marks as a result of striking during production.

The Bavarian State Mint was founded in Munich, Germany in 1158. Today, it is one of the nations four primary mint facilities and is owned by the government of the Free State of Bavaria.

We encourage JM Bullion customers to reach out to us at 800-276-6508. You can also connect with us online using our live web chat and email features.