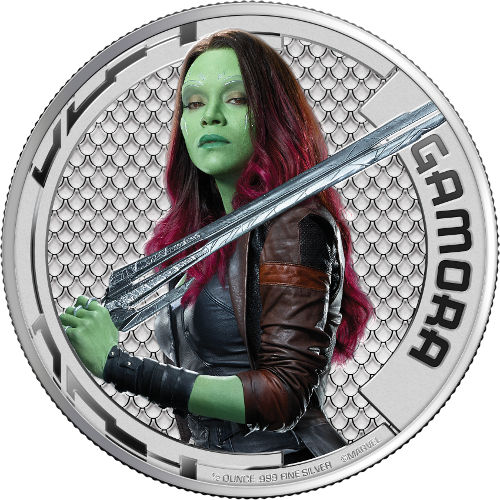 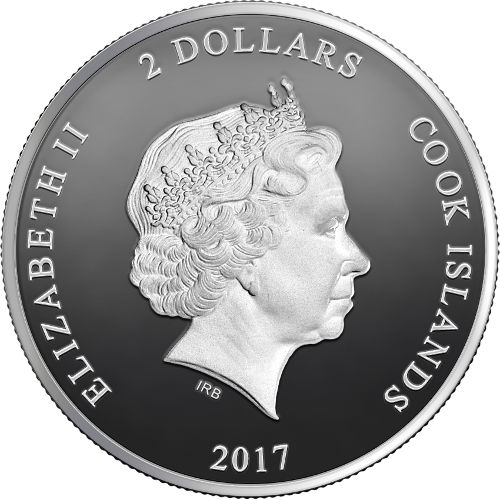 In total there are five coins in this set that represent the major characters in the 2017 release of the Guardians sequel. The second film was actually announced back in 2014 at Comic-Con International before the first film had its theatrical release in the United States, with filming commencing two years later in 2016.

Each of the 2017 oz Cook Islands Guardians of the Galaxy Gamora Silver Coins in this listing arrives inside of a collectible tin that is wrapped in full-color theatrical images from the feature film. The coins are ultra-high relief specimens struck using Smartminting technology at the Mayer Mint of Germany.

On the obverse of all Guardians of the Galaxy Silver Coins youll find the image of Queen Elizabeth II. Her right-profile portrait on these Cook Islands-issued coins comes from 1998 and is the fourth-generation depiction of the Queen, which was created by Ian Rank-Broadley.

The reverse of the 2017 oz Cook Islands Guardians of the Galaxy Gamora Silver Coins features the colorized image of Gamora. Portrayed in the feature films by Zoe Saldana, Gamora is the adopted daughter of Thanos. She is skilled in hand-to-hand combat and is trained in martial arts techniques from various planets.

BH Mayer Mint was founded in Germany in 1871, and continues its operations today under fifth-generation leadership. The coins of the Guardians of the Galaxy Series are available today from Mayer Mint for individual purpose, and there is also a five-coin set available online as well.

We encourage all JM Bullion customers to contact us if they have questions. You can reach our customer service team members on the phone at 800-276-6508, chat with us live online, or simply send us an email with your inquiries. Feel free to visit our website at any time to the diverse array of silver for sale in our catalog!