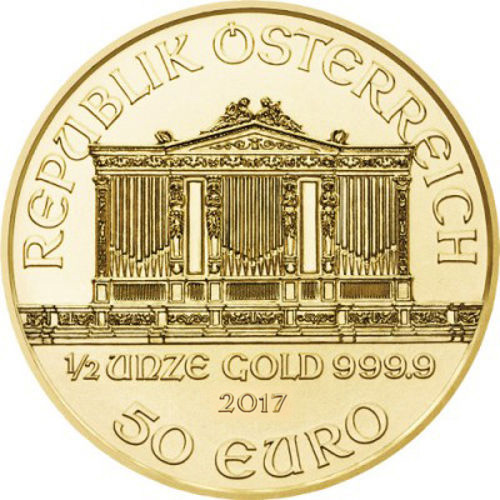 When most investors and collectors think about the most popular gold coins in the world, the South African Krugerrand, Canadian Gold Maple Leaf, Chinese Gold Panda, and American Gold Eagle probably come to mind. Quietly though, the Austrian Gold Philharmonic coin has topped the charts on numerous occasions. Today, the 2017 oz Austrian Gold Philharmonic Coin is available to purchase from JM Bullion.

The Austrian Gold Philharmonic coin debuted in 1989 with the release of a 1 oz and oz variant in the program. The coins remained available only in gold until 2008, when the Silver Philharmonic was introduced, and further expanded with the Platinum Philharmonic in 2016. The 1992, 1995, and 1996 sales years saw the Gold Philharmonic earn the title of best-selling gold coin in the world according to the World Gold Council.

Each 2017 oz Austrian Gold Philharmonic Coin available here today is in BU condition. Coins in this condition show no signs of wear and tear, though you may notice minor flaws that include breaks in the luster, spotted surfaces, and contact marks from striking the blanks during production.

The obverse of the Austrian Gold Philharmonic coin includes the image of the Great Pipe Organ, which is located inside the Musikverein Golden Concert Hall in the Innere Stadt neighborhood of Austrias capital city of Vienna.

On the reverse of the 2017 oz Austrian Gold Philharmonic coin is the image of a collection of musical instruments used by the members of the Vienna Philharmonic Orchestra, which was formed in 1842 and is considered by many to be one of, if not the, finest orchestras in the world.

All Austrian Gold Philharmonic designs came from Thomas Pesendorfer, Chief Engraver of the Austrian Mint. His designs originated in 1989 and have not changed since, finding use on the silver and platinum variants of the coin as well.

The Austrian Mint was formed in 1194 by Duke Leopold V, who used a 15 ton payment of silver from Englands King Richard the Lionheart to refine the first products at the sovereign mint of the nation.

Please direct your questions to a JM Bullion associate on the phone at 800-276-6508. You can also connect with us online through our live web chat and email features.