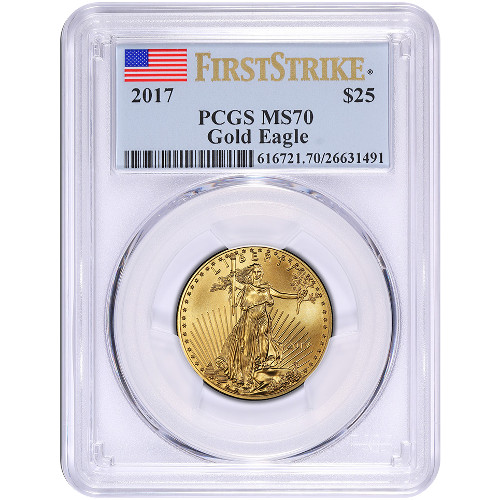 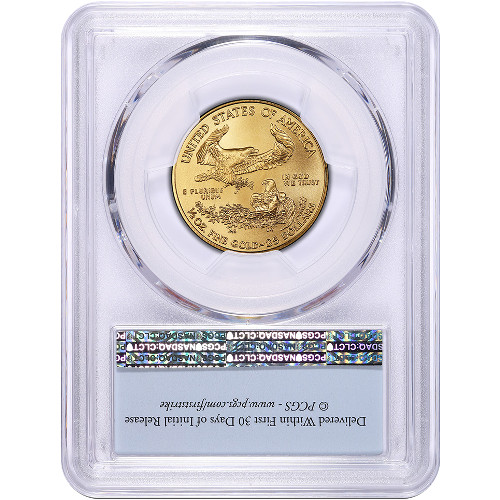 There are few coins in the world as popular as the American Gold Eagle. The official gold bullion coin of the United States, these coins are struck on an annual basis in bullion, proof, and burnished versions. The bullion version of the coin is highly sought-after by investors, and the 2017 oz American Gold Eagle Coin is available today from JM Bullion.

American Gold Eagle coins were introduced in 1986 by the United States Mint. For the first year of production, bullion coins were available in all four fractional weights currently available from the US Mint: 1 oz, oz, oz, and 1/10 oz.

Production of American Gold Eagles has ebbed and flowed significantly in its history. There have been three peaks in production history, with the first coming as the coins were introduced in 1986. The mid to late 1990s saw a second spike in production with the approach of Y2K, and the third peak just passed as the global economic recession resulted in increased demand for gold.

On the obverse of all 2017 oz American Gold Eagle coins is the image of Liberty as she walks forth into an unknown future from the capital of Washington DC. There is freedom in her form, as her robes and hair flow in the wind, and the US Capitol Building is visible at her feet as the rays of the sun outline her figure from behind.

Each 2017 oz American Gold Eagle Coin in this product listing in a Mint State 70 certified coin from the PCGS. Coins in this condition exhibit full, original mint luster and bear no detracting flaws of any type. Coins with a First Strike designation from the PCGS are guaranteed to have arrived at the PCGS or an approved third-party depository within the first 30 days of the release date for 2017 coins issued by the United States Mint.

We encourage all JM Bullion customers to contact us with questions. Were available at 800-276-6508, online using our live chat, or through our email address.