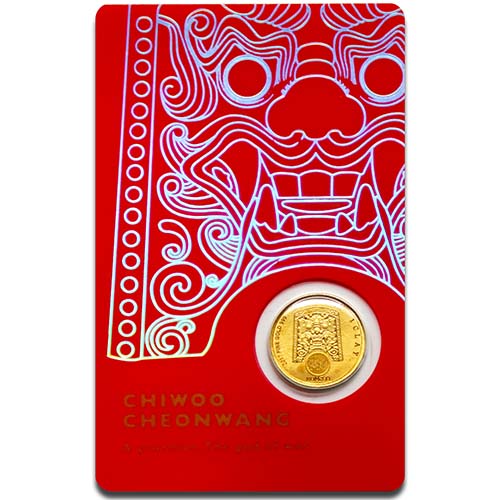 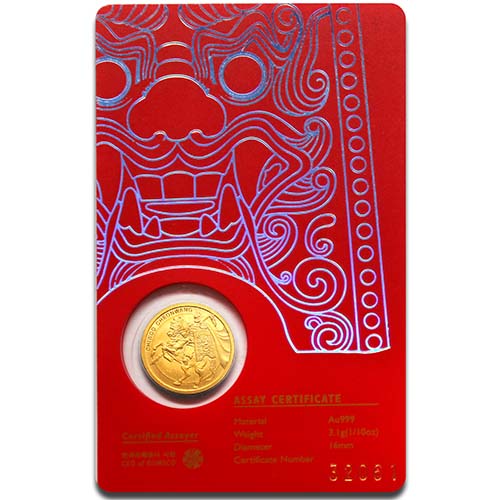 The Chiwoo Cheonwang medallion series is a new silver and gold bullion option for investors from KOMSCO, the official sovereign minting facility of the Republic of South Korea. The Chiwoo medallions debuted in 2016 in both metals with an initial design that has been tweaked for the 2017 release. The 2017 1/10 oz South Korean Chiwoo Cheonwang Gold Medallion is now available to you for purchase online from JM Bullion with the red label packaging.

When the Chiwoo Cheonwang Series debuted in 2016, it included a reverse design that showed Chiwoo Cheonwang standing on the field of battle in his full armor suit. He held his shield in one hand and a long battle spear in the other. This image was altered slightly for the 2017 issue to feature his figure on a battle horse instead of standing on the ground.

Chiwoo Cheonwangs myth stems from a period of Asian culture that is known as the period of 3 Sovereigns and Five Emperors. Stemming originally from Chinese culture, Chiwoo is said to have led tribes outside the sovereignty of the Yellow Emperor into battle against the Emperor and his people.

The reverse of the 2017 1/10 oz South Korean Chiwoo Cheonwang Gold Medallion captures the terrifying image of Chiwoo Cheonwang looking down from the saddle of his war horse in his full battle regalia. Records from Ancient China talk of Chiwoo summoning fog and wind during battle to distort his foes view of the battlefield and enable victory for his forces in the process.

On the obverse of all South Korean Chiwoo Cheonwang Gold Medallions is the image of Chiwoos shield. In addition to his shield, this face of the medallion includes an engraving of the KOMSCO name and the mints latent security mark, a circle with the medallions purity (999) inside of it.

We encourage all JM Bullion customers to contact us with questions. You can reach our customer service team on the phone at 800-276-6508, chat with us live online, or simply send us an email with your inquiries. You can also check gold prices live on our website each day!