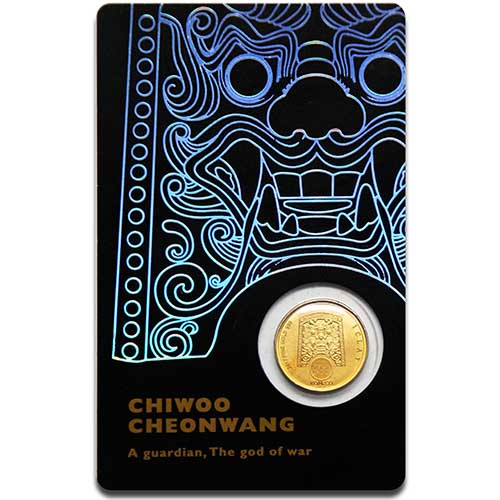 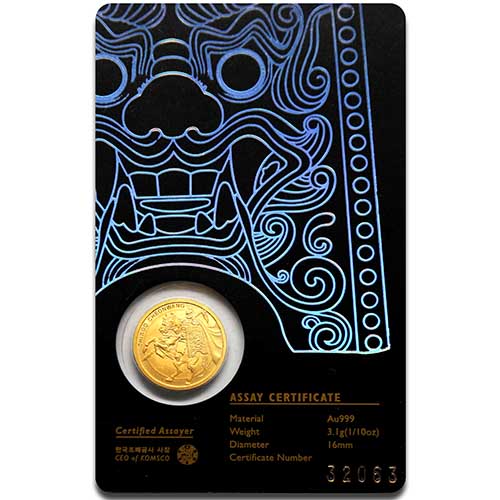 The introduction of a 1/10 oz South Korean Chiwoo Cheonwang Gold Medallion marks the first expansion of this new series from KOMSCO. Introduced in 2016, the series proved immensely popular in its first year of availability, leading to higher mintage figures in 2017, a slight alteration in design, and a new product offering. Right now, 2017 1/10 oz South Korean Chiwoo Cheonwang Gold Medallions are available to purchase online from JM Bullion with black label assay certificate.

With the introduction of the 2017 1/10 oz South Korean Chiwoo Cheonwang Gold Medallion KOMSCO offers new packaging for its gold medallions in this weight. The medallion arrives packaged inside of a sealed assay certificate card, which in this case is black in coloration and features the assay information on the reverse.

The obverse of all 1/10 oz South Korean Chiwoo Cheonwang Gold Medallions features the image of Chiwoos battle shield. Emblazoned upon the shield itself is a reproduction of the facemask Chiwoo wore in battle. As a military leader, he is said to have been capable of casting magic spells to distract his foes and control the weather to the advantage of his forces.

On the reverse of the 2017 1/10 oz South Korean Chiwoo Cheonwang Gold Medallion is the figure of Chiwoo himself. While the 2016 debut issue featured Chiwoo standing on the ground in full armor, the 2017 tweak included mounting Chiwoo high upon his war horse with a spear in his right hand and his armor shield in his left.

KOMSCO is the official sovereign minting facility of the Republic of South Korea. Known officially as Korea Minting and Security Printing Corporation, the facility is headquartered in Daejeon, South Korea and opened on October 1, 1951. The mint strikes, prints banknotes, and produces other government documents for South Korea, while also coining currency for other nations.

If you have any questions, please dont hesitate to ask. JM Bullion customer service is available at 800-276-6508, online using our live chat feature, and via our email address. You can also use our website to view our full catalog of gold coins for sale!