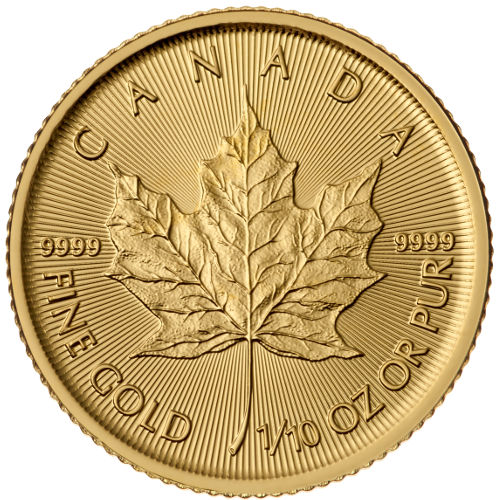 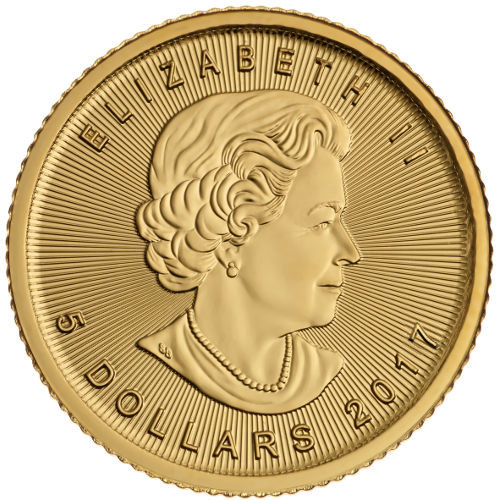 Canadian Gold Maple Leaf coins have been available since 1979, with a 1 oz version the longest running weight in the program. The 1/10 oz Canadian Gold Maple Leaf and the 1/4 oz variant were first struck in November 1982, and have been available every year since. Originally struck with .999 pure gold content, the Royal Canadian Mint also increased the gold content in November 1982 to .9999 pure gold.

Modern Canadian Gold Maple Leaf coins, starting in 2014, have increased security features to help combat counterfeiting. Micro-laser engraved radial lines are visible on both sides of the coin, with the reverse also bearing a maple leaf privy that features the year of issue for the coin in the middle, which is visible only under magnification.

On the reverse of the 2017 1/10 oz Canadian Gold Maple Leaf Coin you’ll find the iconic sugar maple leaf design in the center. Engravings surrounding the maple leaf include the nation of issue, purity, metal content, and weight of the coin.

All of the 2017 1/10 oz Canadian Gold Maple Leaf Coins in this JM Bullion listing are in BU condition. Coins in this condition exhibit no signs of wear and tear, though you may notice minor flaws ranging from breaks in the luster and spotted surfaces to contact marks from the coining process.

The Royal Canadian Mint is the official sovereign mint of Canada, and was founded in 1908 to provide the nation with independent coining capability. The mint’s first task was to refine gold and other precious metals from the Yukon Territories.

If you have any questions, please don’t hesitate to ask. A JM Bullion associate is available on the phone at 800-276-6508, on the web using our live chat feature, or via our email address.