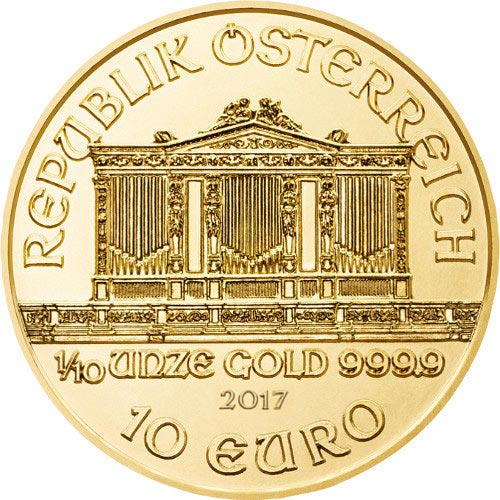 The Austrian Gold Philharmonic coin has a unique position in the coin program’s history. More than just the first coin released in the program, which now includes a silver and platinum variant, it is a coin that bridged the divide between Austria’s independent status and that as a member of the European Union.

Each of the 2017 1/10 oz Austrian Gold Philharmonic Coins in this product listing are in BU condition. Coins in this condition have no sign of wear and tear, however you may notice minor flaws that include breaks in the luster, spotted surfaces, and contact marks.

The obverse of the Austrian Gold Philharmonic Coin includes the image of the Great Pipe Organ, which is located inside of the Musikverein Golden Hall in Vienna, which is the national capital of the nation of Austria.

On the reverse of the 2017 1/10 oz Austrian Gold Philharmonic Coin you’ll find a selection of various musical instruments which are commonly used by members of the Vienna Philharmonic Orchestra, which was formed in 1842 and is considered one of the finest orchestras in the world today.

The Austrian Mint is the production facility responsible for the minting of Austrian Gold Philharmonic coins, along with their silver and platinum versions. The mint was founded in 1194 and is one of the oldest operating facilities in the world.

We encourage JM Bullion customers to reach out to us with questions. You can contact our customer service team on the phone at 800-276-6508, connect with us online through our live web chat, or simply send us an email.