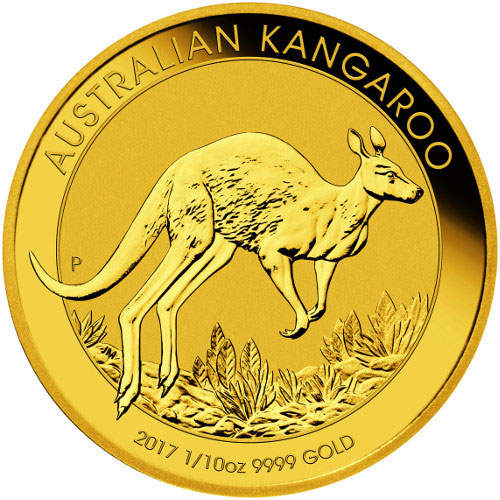 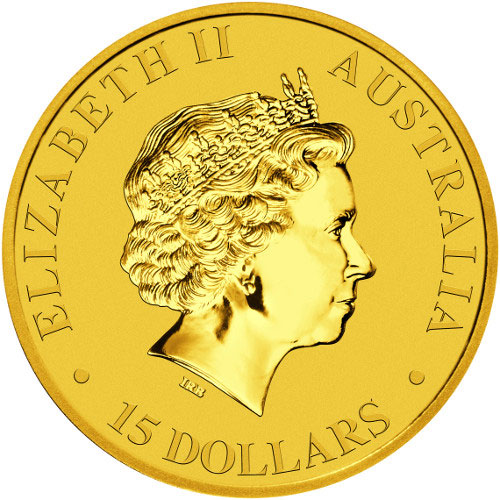 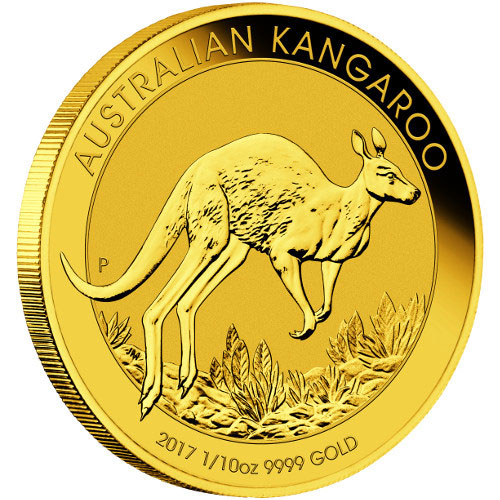 The Australian Gold Kangaroo is the longest running coin series from the Perth Mint, though it has undergone a name and design change once in its now-30-year history. Originally introduced as the Gold Nugget, these coins feature a new kangaroo design on the reverse each year. The 2017 1/10 oz Australian Gold Kangaroo Coin is available today from JM Bullion.

Each of the 2017 1/10 oz Australian Gold Kangaroo coins in this JM Bullion listing is in BU condition. Coins in this condition exhibit no signs of wear and tear, however you may notice minor flaws including breaks in the luster, spotted surfaces, or contact marks from the coining process.

Australian Gold Kangaroo coins debuted in 1986 as the Australian Gold Nugget coin. They originally featured a changing image a gold nugget to symbolize the nations natural gold reserves, but after 1989 the design was changed to feature the well-known kangaroo instead.

The reverse of the 2017 1/10 oz Australian Gold Kangaroo Coin bears the image of a kangaroo hopping across the outback, with just a patch of sparse vegetation below its feet. The kangaroo is the largest marsupial in the world and gets around exclusively on its power hind legs.

On the obverse of all 2017 Australian Gold Kangaroo coins youll find the image of Queen Elizabeth II. Her Majestys effigy has appeared on the obverse of Australian coinage since her ascension to the throne of England. This depiction was created in 1998 by Ian Rank-Broadley, and serves as the fourth-generation image of the Queen.

The Perth Mint is located in the city of Perth, Western Australia. Opened in 1899, just three years before Australian federation, it was originally a Royal Mint facility under British colonial control. Today it is a state-owned entity of Western Australia and operates independently of the Royal Australian Mint.

We encourage JM Bullion shoppers to reach out to us on the phone at 800-276-6508 with any questions. You can also connect with us online using our live web chat feature or by sending us an email with your inquiries. To see similar products, check out our full selection of Australian Gold Coins.