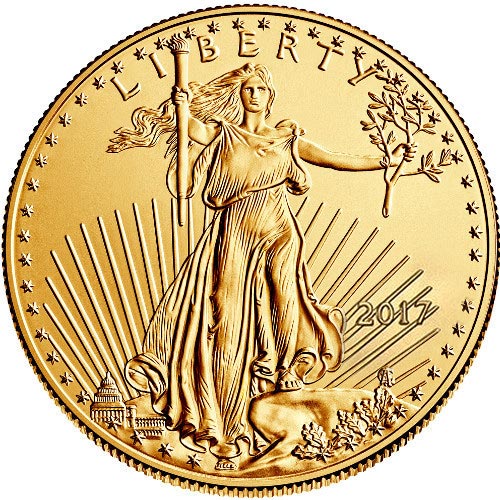 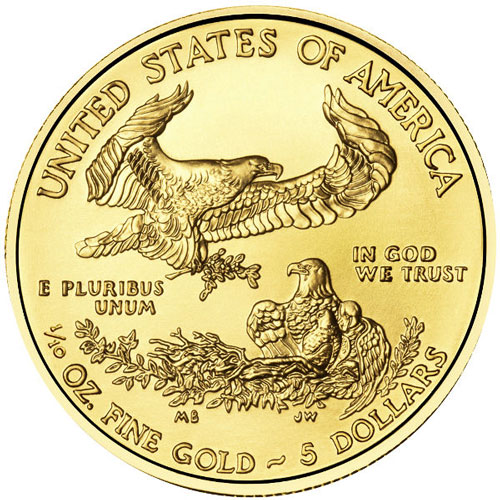 Each 2017 1/10 oz American Gold Eagle Coin listed here at JM Bullion is in BU condition. Coins in BU condition exhibit no signs of wear and tear, though you may notice minor flaws such as breaks in the luster, spotted surfaces, or contact marks from the coining process.

American Gold Eagle coins feature the same obverse and reverse designs each year. The obverse design of Liberty from Augustus Saint-Gaudens is widely regarded as the finest American coin design of all time. It features a full-length figure of Liberty walking from Washington DC into the future, with her torch as a guiding light.

On the obverse of the 2017 1/10 oz American Gold Eagles is that image of Liberty from Saint-Gaudens. He was commissioned by President Theodore Roosevelt directly to revitalize American coinage, creating this Liberty design in 1907 for use on the $20 Gold Double Eagle coin.

The reverse side of the American Gold Eagle coin features an image of a male bald eagle flying over the family nest. He clutches an olive branch in his talons, while the female is featured below standing guard over the nest and vigilantly watching the hatchlings within. Busiek created this design in 1986 specifically for the American Gold Eagle.

All American Gold Eagle coins are produced by the United States Mint, which was founded in 1792 and produced its first circulation coins by 1794. The US Mint currently consists of facilities at the San Francisco Mint, Denver Mint, Philadelphia Mint, and West Point Mint.

Please direct your questions to a JM Bullion associate at 800-276-6508, connect with us online through our live chat, or simply email us with your inquiries.

Francis from NJ - February 21, 2018
"That arrived so fast, insane! Product was exactly what i was expecting."

Michael from FL - January 25, 2017
"I got my 1/10 oz American Gold Eagle today. It is absolutely gorgeous! It arrived with secure packaging and I got it in only 3 days. JMB has never let me down. Great job guys! Keep up the good work!"