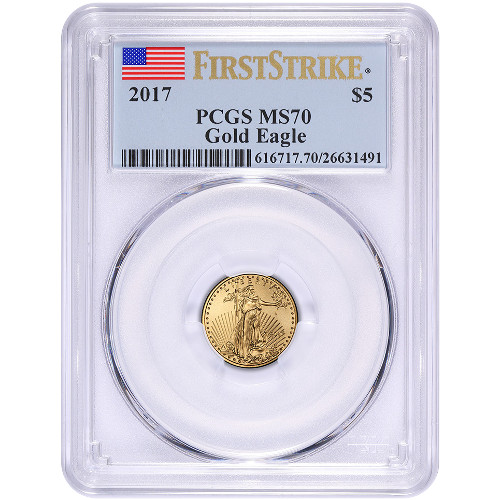 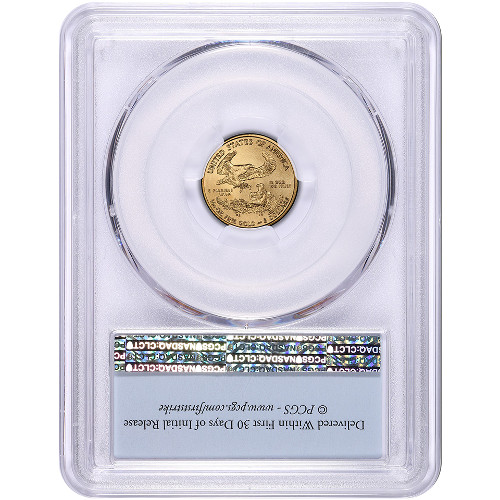 American Eagle coins from the United States Mint represent the official bullion lineup of the country. The American Gold Eagle is the official gold bullion coin of the nation, and is available in four weights and three different versions with each new release. Today, the 2017 1/10 oz American Gold Eagle Coin is available to you online from JM Bullion.

American Gold Eagle coins feature the same obverse and reverse designs each year. The obverse design of Liberty from Augustus Saint-Gaudens is widely regarded as the finest American coin design of all time. It features a full-length figure of Liberty walking from Washington DC into the future, with her torch as a guiding light.

The 2017 1/10 oz American Gold Eagle Coins in this listing have a perfect grade from the PCGS. Mint State 70 coins feature full, original mint luster and bear no detracting flaws of any kind on their surface areas. First Strike is a designation for coins that are received by the PCGS within the first 30 days of the initial release date set by the US Mint for 2017 issue coins.

On the obverse of the 2017 1/10 oz American Gold Eagle is the iconic image of Lady Liberty from the $20 Gold Double Eagle, which was minted from 1907 to 1933. President Theodore Roosevelt personally selected Augustus Saint-Gaudens to create the design, which helped reinvent American gold coin design.

The reverse of 2017 1/10 oz American Gold Eagle Coins features a design from modern artist Miley Busiek. Created in 1986 and used exclusively on the American Gold Eagle, Busieks depiction of a family of bald eagles includes a male eagle returning to the nest where a female closely guards a group of hatchlings.

All American Gold Eagle Coins are produced exclusively at the West Point Mint location in the United States Mint system. These coins are released on an annual basis by the mint, and have at some point been struck by other mints with the exception of the Denver Mint.

Please direct your questions to a JM Bullion customer service associate at 800-276-6508, connect with us online through our live chat, or send us an email.