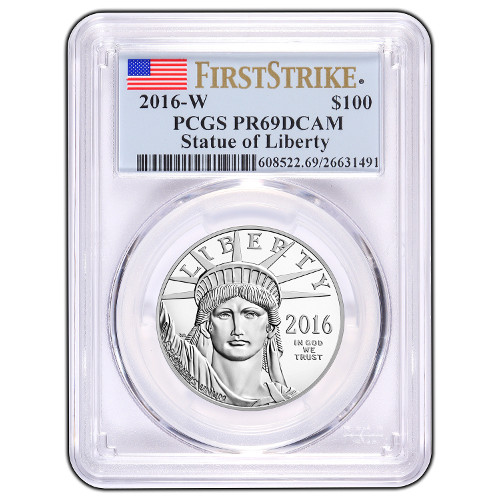 Each 2016 Proof American Platinum Eagle coin in this product listing has a near-perfect grade of PR69 from the PCGS. Coins in this condition maintain full, original mint luster, but also feature a maximum of two minor detracting flaws. These flaws are often limited to miniscule contact marks or other blemishes, and always found outside the primary focal areas of the coin.

The Deep-cameo designation identifies a coin with a brilliant contrast between the design finish and background field. The design set on both sides of the coin has a strong, frosted finish compared to the deeply-mirrored, clear background field of the obverse and reverse.

In order to earn the First Strike designation, coins must arrive at the PCGS depository or an approved third-party facility within the first 30 days of the release date for 2016 Platinum Eagles as set by the United States Mint.

On the obverse of the 2016 1 oz Proof American Platinum Eagle you’ll find the majestic image of the Statue of Liberty. Known as Portraits of Liberty, this design came from former US Mint Chief Engraver John Mercanti and has been in use since 1997.

The reverse features of the second installment in the Torches of Liberty design series. The final release in this limited program, the Torch of Enlightenment design features Liberty holding her torch to the side with her right hand and clutching a large olive branch in her left as an American bald eagle flies behind her.

Please don’t hesitate to contact JM Bullion with any questions you might have about the 2016 Proof American Platinum Eagle coin. You can contact us on the phone at 800-276-6508, connect with us online using our live chat, or email us directly.