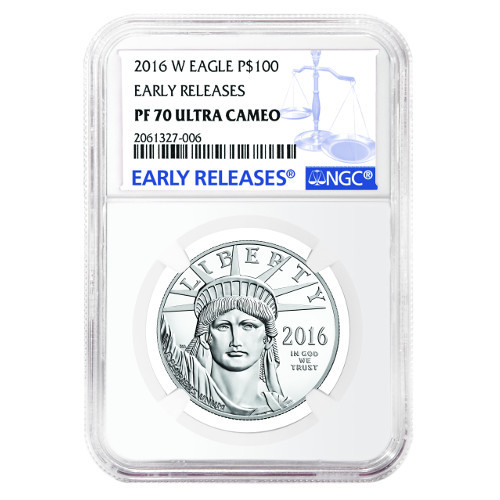 Proof American Platinum Eagle coins are unique in the United States Mint catalog because they are the only products to feature a rotating reverse design on an annual basis. While the obverse and reverse of the gold and silver counterparts have been the same since 1986, the Proof Platinum Eagle has gone through various changes in the reverse design as part of different design series.

The 2016 Proof American Platinum Eagle features the second and final Torches of Liberty design for the reverse. The image was designed by Paul C. Balan, a member of the United States Mint Artistic Infusion program, and sculpted by US Mint Sculptor-Engraver Joseph Menna.

Each 2016 1 oz Proof American Platinum Eagle Coin available today from JM Bullion is a perfect specimen according to the PCGS. Coins with a PR70 grade exhibit full, original mint luster and bear no detracting flaws.

As a First Strike coin, the PCGS guarantees that these American Platinum Eagle coins arrived at its depository from the United States Mint within the first 30 days of the release date set for 2016 issue coins.

The Deep-cameo designation, or DCAM, is reserved for coins with a strong, frosted finish to the design and a deeply-mirrored, clear background field. This stark contrast gives the design the appearance of floating above the background of the coin.

On the obverse of the 2016 Proof American Platinum Eagle is the Portraits of Liberty design, a modern vision of the Statue of Liberty that sees her staring off into the future as a guiding force for freedom and liberty. The image has graced the obverse of the series since 1997 and was created by John Mercanti.

The reverse bears the second Torches of Liberty design, which is known as the Torch of Enlightenment. In the design, a bald eagle flies past Liberty as she holds up the torch of enlightenment and an olive branch.

Please contact JM Bullion with any questions at 800-276-6508, or contact us online using our live web chat and email options.