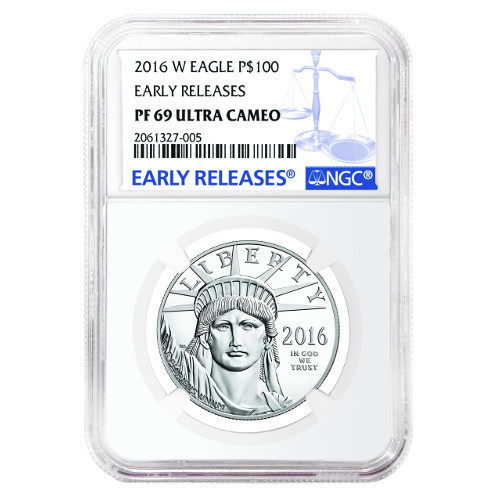 Proof American Platinum Eagle coins are one of the most popular products from the United States Mint. Struck annually with extremely low mintage figures, these collectible coins often sellout because of their value and the limited availability. Right now, JM Bullion has the 2016-W 1 oz Proof American Platinum Eagle coin available for purchase in near-perfect condition from the NGC.

American Platinum Eagle coins were originally introduced in 1997 in bullion and proof versions. The bullion coin was designed to feature the same obverse and reverse image annually, much like the popular American Gold Eagle and American Silver Eagle coins in the series.

However, the proof version of the coin is unique in that the US Mint changes the reverse design every year, making it the only major bullion coin from the mint to do so. The current design series is the two-year Torches of Liberty theme, which concludes in 2016 with the Torch of Enlightenment design.

Each 2016 1 oz Proof American Platinum Eagle coin in this JM Bullion listing is a near-perfect specimen according to the NGC. Coins with a PF69 grade feature full, original mint luster, but also have a maximum of two minor detracting flaws. These flaws are characterized as miniscule contact marks or other minor blemishes located outside the primary focal areas of the coin.

Early Release coins must arrive at the NGC depository or an approved third-party location within the first 30 days of the release date set for 2016 American Platinum Eagle coins by the US Mint in order to earn the designation.

On the obverse of the 2016 1 oz Proof American Platinum Eagle is the Portraits of Liberty design created in 1997 by then-US Mint Chief Engraver John Mercanti. The reverse side of the coin has the Torch of Enlightenment design created by Paul C. Balan and Joseph Menna. Balan is a US Mint Artistic Infusion Program artist and Menna is a US Mint Sculptor-Engraver.

Please feel free to contact JM Bullion at 800-276-6508 with any questions, or connect with us online using our live web chat and email options.