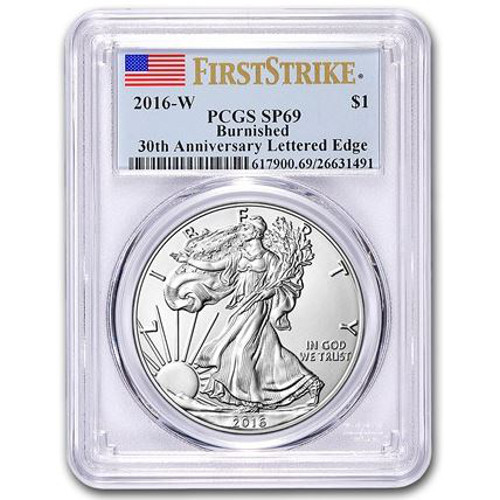 After back-to-back record-breaking sales years, the United States Mint releases the 2016 American Silver Eagle coin for purchase. The American Silver Eagle reached new heights in 2014 and 2015, selling 44 million and 47 million coins, respectively. The total mintages figures for 2014 exceeded the mintage numbers for the program from 1986 to 2010 combined. Today, the 2016-W Burnished American Silver Eagle is available online from JM Bullion.

Burnished coins from the United States Mint are struck with the utmost attention to detail. The silver blanks used to produce American Silver Eagles are polished in a rotating drum before being taken to the coining press. Once polished, those blanks are removed by gloved hand and placed one at a time into the coining press.

The United States Mint introduced the Burnished American Silver Eagle coin in 2006 for the 20th anniversary of the American Eagle coin program. The burnished coin was struck in 2006 and 2007, not offered in 2009 and 2010, and continues today in much lower mintage levels.

Each of the 2016-W Burnished American Silver Eagle coins in this listing earned a unique Specimen Proof 69 grade from the PCGS. Coins with this grade have full, original mint luster, along with a maximum of two minor detracting flaws and feature a finish that is considered to meet particularly high standards.

As a First Strike coin, these 2016-W Burnished American Silver Eagle coins arrived at the PCGS depository or an approved third-party depository for certification within the first 30 days of the release date for 2016 issues set by the US Mint.

On the obverse side of the coin is Adolph A. Weinmans depiction of Lady Liberty. Wearing the American flag around her shoulders, Liberty strides toward the setting sun as a representation of Americas march toward a brighter future.

The reverse side bears John Mercantis heraldic eagle design. Created in 1986, this image depicts the American bald eagle as it sits behind the nations heraldic shield, along with the coins weight, metal content, purity, and face value.

Please direct your questions to a JM Bullion customer service associate at 800-276-6508, or connect with us online using our live web chat and email features.