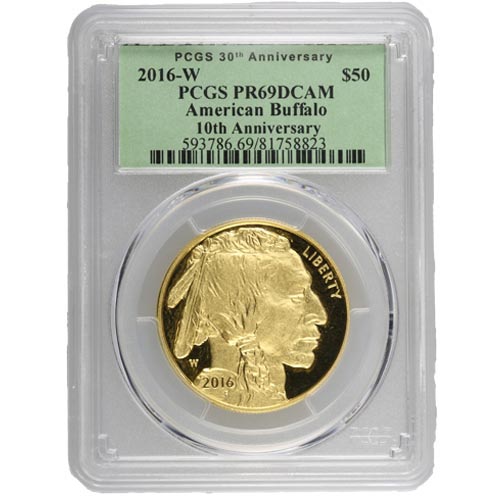 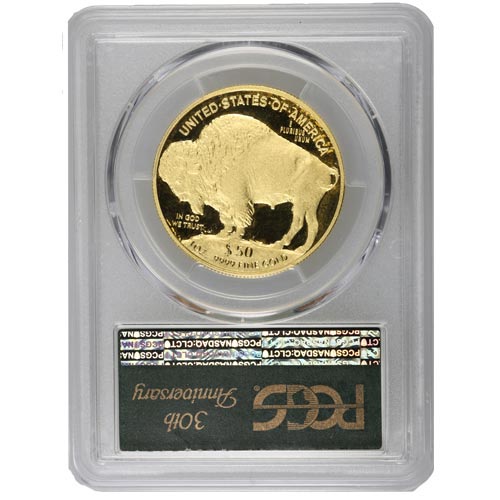 James Earle Frasers classic Buffalo Nickel design from 1913 was chosen as the inspiration for the countrys first-ever 24-karat gold coin. The American Gold Buffalo debuted in 2006, making these 2016 coins part of the 10th anniversary.

The 2016-W 1 oz Proof American Gold Buffalo Coins listed here today are PR69 certified by the PCGS. Gold coins with this certification feature full, original mint luster and a maximum of two minor detracting flaws. These are limited in scope to minuscule hairlines or contact marks, and in range to the areas outside the primary focal points of the coins surface.

DCAM coins are special proofs with added visual brilliance. Deep-cameo refers to the intense contrast between the strong, frosted finish of the design features on the coin and the deeply-mirrored, clear background field. The resulting effect gives the design features the appearance of floating above the coins background surface.

On the obverse of the 2016 1 oz Proof American Gold Buffalo youll find the image of a Native American chieftain, captured in right-profile relief and featuring the same engraving of Liberty found on the original Buffalo Nickels.

The reverse of the coin features a depiction of Black Diamond, the animal that inspired Frasers buffalo design. Black Diamond was a resident bison at the Central Park Zoo in New York City during the early 20th century.

Please dont hesitate to contact JM Bullion with questions. Our customer service associates are available at 800-276-6508, on the web using our live chat, and via our email address. Feel free to visit our homepage at any time to research the current gold price!