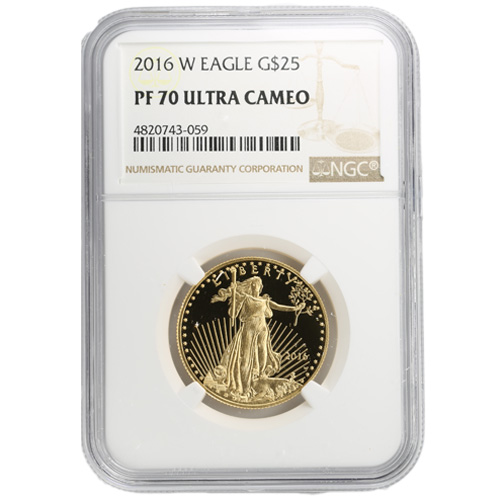 The 2016 Proof American Gold Eagle coins were released as usual as part of the 30th-anniversary celebration of the nations official bullion coins. Entering the 2016 release year, the Gold Eagles had established a comfortable range of demand each year dating back to the 2012 issue. Though there was stability, the mintage figures each year during the 2010s rank as the lowest in the programs history. The 2016 1/2 oz Proof American Gold Eagle is currently available to you for purchase online from JM Bullion in perfect condition.

Following the 2011 release of Proof American Gold Eagles, the collectible gold coins for sale continued to see declining demand. Starting with the 2012 release of the coins, the US Mint saw stability return to the collection similar to that which it enjoyed in the early 1990s. The range of mintage for the 1/2 oz coins from 2012 to 2015 fell between a low of 12,718 and a high of 15,820 coins.

While this marked a good period of stability in the demand for the collectible Proof Gold Eagle, it also marked a low point in terms of mintage. The 2013, 2013, 2014, and 2015 coins (in order) represent the four lowest mintage figures seen in the collection for this weight to date.

On the obverse of 2016 1/2 oz Proof Gold Eagles is the design of Lady Liberty which Augustus Saint-Gaudens created in 1907. Originally intended to be struck as a high-relief design, the image features Liberty holding a torch high in her right hand and an olive branch in her left. The design includes a ring of 50 stars around her figure and sun rays emanating from the background.

We encourage you to contact JM Bullion at 800-276-6508 with questions. You can also reach us online using our live chat and email address.