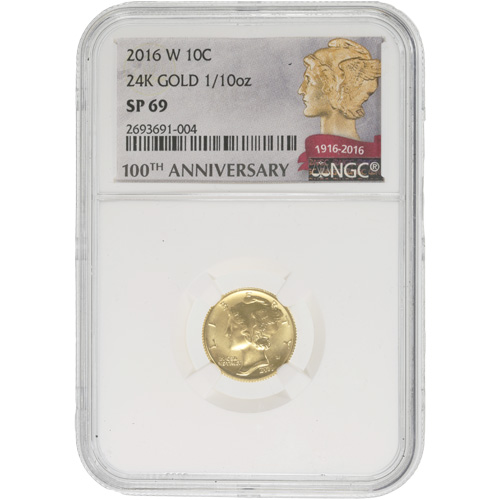 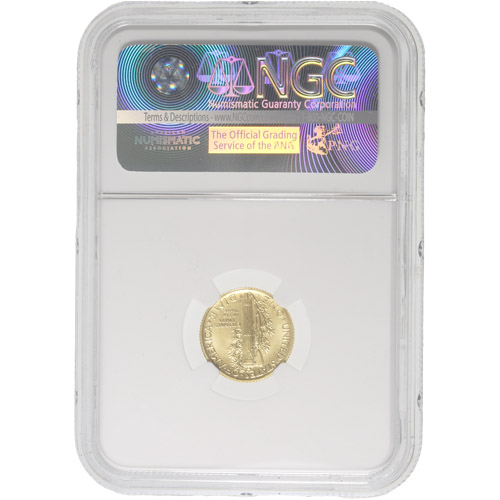 The 2016 American Gold Centennial Coins featured revived and modernized images of the Mercury Dime from Adolph A. Weinman, the Standing Liberty Quarter from Hermon Atkins MacNeil, and the Walking Liberty Half Dollar, also from Weinman. Each one of the coins was originally released with a Certificate of Authenticity and commemorative display.

A number of these coins were eventually submitted to the NGC and PCGS for certification purposes, with only small numbers of those coming out with the valued 70 or 69 certification levels from either grading house. The Specimen Proof strike type is one that represents a hybrid between Mint State and Proof designations.

The obverse side of 2016-W 1/10 oz American Gold Mercury Dime Coins features the left-profile portrait of Liberty known as Winged Liberty. This beautiful design captures Libertys head with a winged Phrygian cap. Though it was officially known as the Winged Liberty design, the coin picked up a different moniker in circulation. Americans believed the winged Phrygian cap made Liberty look like the Roman messenger god Mercury, and the name Mercury Dime eventually stuck with the coin.

On the reverse field of the 2016-W American Gold Mercury Dime Coin is an image of the Roman fasces. A symbol of the power and jurisdiction of Roman magistrates, the fasces in this design is emblematic of war, but is offset by the olive branch of peace that surrounds the fasces.

These 2016-W 1/10 oz American Gold Mercury Dime Coins are available in near-perfect condition. An SP69 coin showcases full, original mint luster with a maximum of two minor detracting flaws. Those flaws are limited in scope to the areas outside of the primary focal points and limited in nature to imperceptible flaws such as minuscule contacts or hairlines.

JM Bullion customer service is available to assist you on the phone at 800-276-6508. We are also available online through our live chat and email address features.