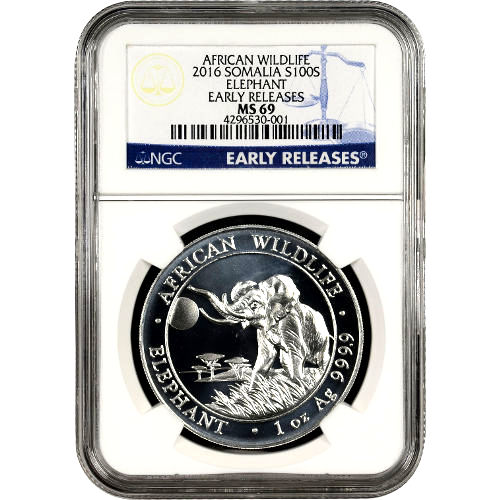 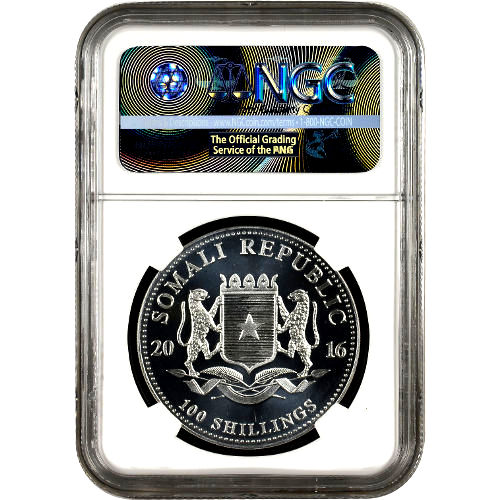 The Somalia Silver Elephant is one of the more intriguing bullion coins in the world. It follows the popular tenets and concepts of bullion coin design from the likes of the Perth Mint and Chinese Mint, striking coins on an annual basis with a new reverse design. Right now, JM Bullion offers 2016 1 oz Somalia Silver Elephant coins as part of the Early Release collection.

Somalia Silver Elephant coins originated in 1999 as an African Wildlife Series coin for the nation of Rwanda. While that series carries on as a bullion program for Rwanda, the African Elephant design was transferred to Somalia as a nation of issue.

First produced in 2004 with Somalia as the nation of issue, the coins had extremely limited mintages of just 5,000 silver coins annually through 2008. The reverse design used each year was changed to create collector value for the series. At no point in the series has the same design been used twice.

On the reverse side of the 2016 1 oz Somalia Silver Elephant coin is the image of a bull elephant at the edge of a river. The grasslands are visible at his feet, while the sun rises high in the sky behind him and the river winds off into the distance.

The obverse bears the familiar image of the Somali coat of arms. Engravings include Somali Republic, the year of issue, and the face value of the coin.

Each of the 2016 1 oz Somalia Silver Elephant coins in this JM Bullion product listing is in Mint State 69 condition. The NGC states that this means the coin has its full, original mint luster, with a maximum of two minor detracting flaws. As part of the Early Release series, these coins arrived at an NGC depository within 30 days of the coins release by the Bavarian State Mint.

If you have any questions for a JM Bullion associate, we encourage you to reach out to us. Our team members are available at 800-276-6508, online using our live chat, or via email. If you are interested in similar products, be sure to check out our selection of World Silver Coins.