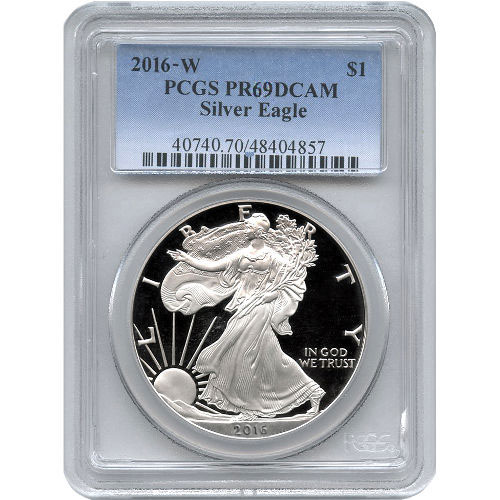 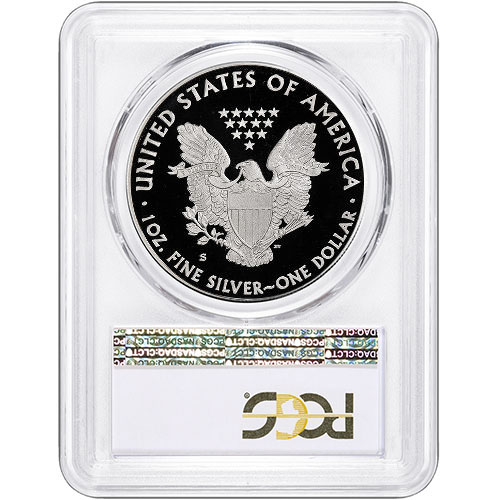 Celebrating its 30th anniversary in 2016, the American Silver Eagle coin series is at all-time highs for popularity as it enters a third decade of availability. Among the popular options in the program is the official collector’s version of the coin, the Proof Silver Eagle. Today, the 2016-W 1 oz Proof American Silver Eagle Coin is available to you online from JM Bullion with PCGS certification.

All 2016 Proof American Silver Eagle coins in this listing have PR69 grades from the PCGS. Coins in this condition exhibit full, original mint luster, but also feature a maximum of two minor detracting flaws such as minuscule hairlines. All flaws are found outside the primary focal areas of the coin.

When a Proof Silver Eagle has a DCAM designation, it is known as a deep-cameo specimen. Coins in this condition have strong, frosted matte finishes contrasted against a deeply-mirrored, clear background field. The two visual effects combine to give the impression of a design floating over the coin’s actual surface.

The reverse of all Proof American Silver Eagle coins features the heraldic eagle of the US. This design centers on the bald eagle sitting behind the nation’s heraldic shield, clutching the arrows of war in one talon and the olive branch of peace in the other. Then-US Mint Chief Engraver John Mercanti created this design in 1986 as a refinement on the classic heraldic eagle imagery.

Please don’t hesitate to reach out to JM Bullion if you have questions. Our customer service associates are available on the phone at 800-276-6508, on the web using our live chat feature, and at our email address.