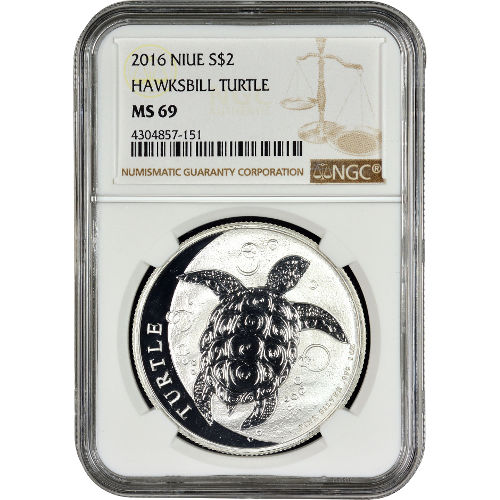 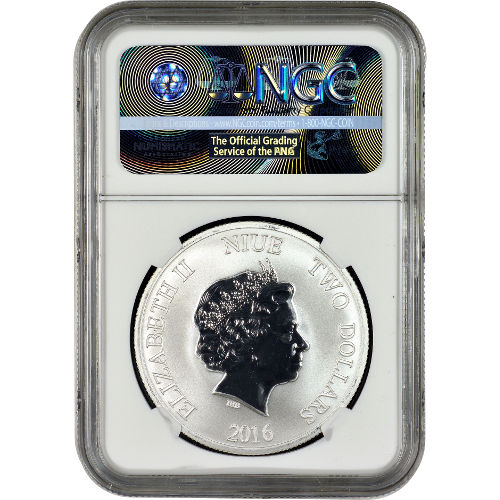 Each 2016 1 oz Hawksbill Niue coin in this product listing is considered a near-perfect specimen by the NGC. Coins with an MS69 grade have their full, original luster from the mint. However, you may also notice a maximum of two minor detracting flaws, each of which is located outside the coin’s primary focal areas.

The New Zealand Hawksbill Niue coin highlights the native sea turtle species found throughout the tropical waters of the South Pacific, as well as the tropical regions of the Atlantic and Indian Oceans. Hawksbills were once considered a delicacy, but local island nations have taken measures to protect this now-endangered species.

When the Hawksbill Niue was originally introduced in 2010, it was actually struck for Fiji and known as the Fiji Taku coin, after the local dialect’s word for the hawksbill. Since 2014 the coins have been produced for the autonomous island of Niue.

On the reverse is the image of the hawksbill turtle as it swims through the warm waters of the Pacific Ocean. A frosted finish in the water design gives great contrast to the coin’s design, with the word “Turtle” engraved on the left side.

The obverse features the right-profile portrait of England’s Queen Elizabeth II. Her Majesty’s profile has appeared on commonwealth coins in Canada, New Zealand, and Australia since she ascended to the throne in 1952.

The New Zealand Mint is a privately-owned entity located in Auckland. New Zealand has no sovereign mint, trusting the Royal Canadian Mint and Royal Mint in London to strike its currency.

If you have questions, please feel free to reach out to JM Bullion at 800-276-6508. We’re also available online using our live chat and email features.