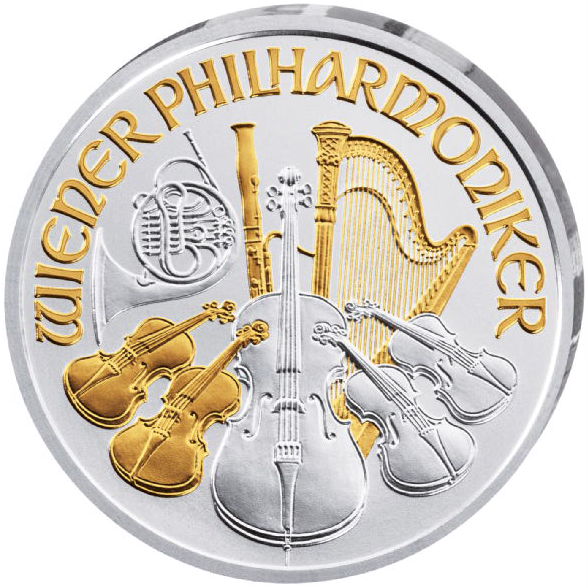 Austrian Philharmonic coins originated in 1989 with the Austrian Gold Philharmonic coin, but silver enthusiasts had to wait for 2008 to see the coin in a silver bullion version. Thomas Pesendorfer created both the reverse and obverse designs in 1989 for the gold coin, and those continue as the primary images today on both the gold and silver coins.

Each 2016 Austrian Silver Philharmonic coin in this product listing features a Brilliant Uncirculated condition. Coins with a BU grade exhibit no signs of wear and tear, but may feature breaks in the luster, spotted surfaces, or contact marks.

Gilded coins combine the best appearances of gold and silver coins. These are standard Austrian Silver Philharmonic coins, but the reverse design set on the coin features a layer of 24-karat gold that adds contrast and beauty to the design.

The obverse of the coin depicts the pipe organ found within the Golden Concert Hall, or Musikverein, which is the home concert hall of the Vienna Philharmonic Orchestra and is located in the Innere Stadt neighborhood of Vienna.

On the reverse is the cornucopia of musical instruments representing the popular instruments used by members of the orchestra. Featuring a Vienna horn, harp, cello, flute, and bassoon, these are the images gilded with 24-karat gold on these unique coins.

The Austrian Mint was founded in 1194 by Duke Leopold V with 15 tonnes of silver paid to him as ransom by Richard the Lionheart of England to secure safe passage for his troops.

If you have questions, don’t hesitate to reach out to JM Bullion. Our associates are available at 800-276-6508, online using our live chat, and via email.

Rick from OH - February 03, 2017
"I purchased this coin along with a British Sovereign gilded coin, and they both exceed my expectations! Worth every dollar! Thank you, JM Bullion for offering these outstanding coins!"