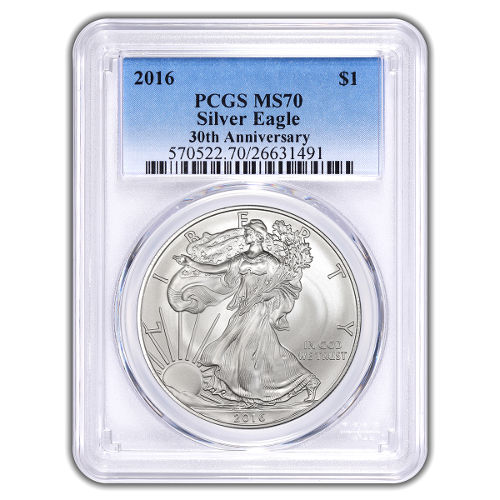 The American Silver Eagle coin program from the United States Mint is celebrating its 30th anniversary in 2016, and this is your chance to obtain one of these stunning bullion specimens in perfect condition. Featuring iconic American images of Lady Liberty and the bald eagle. Right now, the 2016 American Silver Eagle is available through JM Bullion with an MS70 grade.

Each of the 2016 American Silver Eagle coins available from JM Bullion today are Mint State 70 coins according to the PCGS. As a perfect specimen, these coins still have their full, original mint luster.

American Silver Eagle coins are available from the United States Mint now in bullion, proof, and burnished versions. When the coins were first introduced in 1986, the Mint offered only a bullion and proof version of the coin. The bullion coins in the series are the only ones produced every year throughout the 30 years of production for the coins, with the burnished introduced in 2006 and the proof not struck in 2009.

On the obverse of all American Silver Eagle coins is Adolph A. Weinmans Walking Liberty design. First used on the iconic Walking Liberty Half Dollar from 1916 to 1947, the image shows a full-length depiction of Liberty as she strides toward the setting sun with an American flag draped over her shoulders.

The reverse of the coin was designed by US Mint Chief Engraver John Mercanti. His modern vision of the heraldic eagle features an American bald eagle set behind the nations heraldic shield, with 13 stars arranged in a triangle above its head as a representation of the countrys original colonies.

Please direct your questions to a JM Bullion associate at 800-276-6508, or contact us online using our live chat feature or email address.