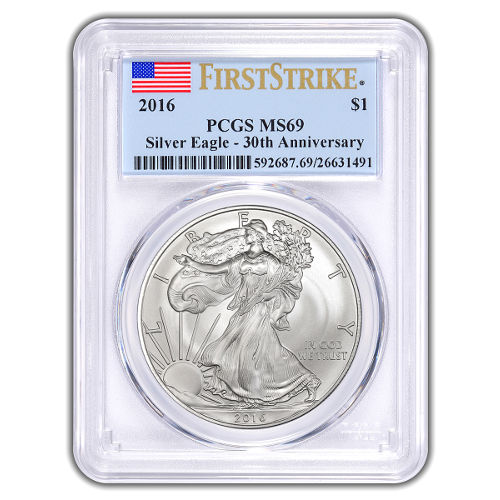 The American Silver Eagle program from the United States Mint celebrates 30 years of continuous production in 2016, and roars into a new year as the worlds most popular silver bullion product in the world. After three consecutive record breaking years of production, the US Mint will be ready to see if the coins can surpass production records yet again in 2016. Today, the 2016 American Silver Eagle bullion coin is available from JM Bullion in perfect condition.

All of the 2016 American Silver Eagle coins offered by JM Bullion in this product listing are near-perfect specimens according to the PCGS. Coins in Mint State 69 condition have full, original luster, but also have a maximum of two minor detracting flaws such as miniscule contact marks or blemishes.

As a First Strike Series coin, the Professional Coin Grading Service verifies that these coins were received by their depositories or an outside, approved depository within 30 days of the products release from the United States Mint.

When the United States Mint released the American Silver Eagle in 1986, the coin was made available in bullion and proof. These two versions of the coin persist today, with these bullion versions struck in every year without fail. The US Mint released a brand new burnished version of the coin in 2006 to mark the 20th anniversary of the program, giving the American Silver Eagle three variants.

Adolph A. Weinmans Walking Liberty design, featured on the Walking Liberty Half Dollar from 1916 to 1947, graces the obverse of the American Silver Eagle. John Mercanti, Chief Engraver of the United States Mint (1986-2010) created the heraldic eagle image on the reverse of each coin.

If you have any questions about these 2016 American Silver Eagle coins, please feel free to reach out to JM Bullion. You can reach one of our associates on the phone at 800-276-6508. We are also available online u sing our websites live chat feature or by submitting your questions to us via email.