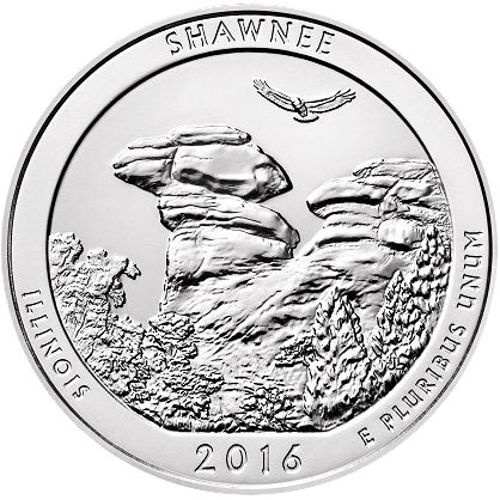 The United States Mint is gearing up for the full release of its 2016 America the Beautiful silver coins, and the state of Illinois is first up on the list for release in the program’s seventh year of production. As with all other coins in the series, a national park, forest, or monument will represent each state in the 2016 series, and Shawnee National Forest is honored on the Illinois coin. Right now, the 2016 5 oz ATB Shawnee National Forest Silver Coin is available from JM Bullion.

Shawnee National Forest is located in the very southern tip of Illinois, and covers 265,000 acres of land in the Ozark and Shawnee Hills region of the state. The area is administered by the U.S. Forest Service, and was first established in September 1939 by President Franklin D. Roosevelt.

Most of the land originally added as part of the forest was exhausted farmland, but significant efforts by the President Roosevelt’s Civilian Conservation Corps added pine trees to the region that rebuilt the soil levels and prevented future erosion.

On the reverse side of the 2016 5 oz ATB Shawnee National Forest Silver Coin is the image of the famous Camel Rock setting in the forest. The rock feature is so named because it resembles a seated camel, with a distinct head and hump in the back. Natural vegetation is visible in the foreground, with a red-tailed hawk flying overhead.

The obverse bears the standard imagery used on all ATB silver coins. President George Washington’s left-profile portrait, used on circulation quarters since 1932, is featured in the center.

All coins in the America the Beautiful program are produced by the United States Mint, predominantly at the Philadelphia Mint and Denver Mint. The former had a new coining press installed in 2010 that is capable striking one million coins each year.

If you have questions, please reach out to a JM Bullion associate at 800-276-6508, connect with us online via live chat, or send us an email. If you are interested in similar products, be sure to check our selection of American Silver Eagle Coins.

Mark from IL - May 31, 2016
"Very Nice big coin. I was pleasantly surprised that it was shipped in a capsule. I started collecting these late last year. Will only buy them as they come out. Since I don't want to pay a premium for older ones. I will buy the latest from them because I am hoping for another free capsule.Prices are about the same everywhere on these."

Matthew from WV - March 02, 2016
"This coin is absolutely gorgeous. I bought a tube to house the ATB 5 ounce coins in. I highly recommend NOT doing that. Getting these coins out of their original hard plastic casing is next to impossible and a sure fire fingernail breaker if you try. Now I just stack them in their original casing. None the less, these coins are BEAUTIFUL and you will not find a cheaper price and faster shipping than JM Bullion. Matt Cisco"

Mario J from NJ - February 28, 2016
"This is such a gorgeous design, I love this one, in comparison with the coin previous to this one, NY - Saratoga, which was a simple and plain design."