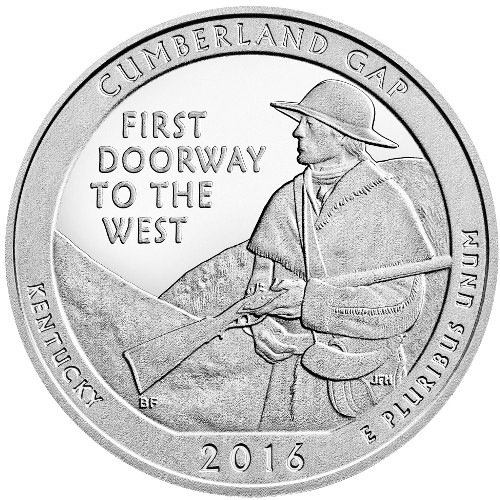 The second coin released in the 2016 schedule of the America the Beautiful commemorative quarter program represents the state of Kentucky. Cumberland Gap National Historical Park is one of the most beautiful places in the continental United States, and the area played a vital role in the nation’s growth during and after the Revolutionary War. Now, the 2016 5 oz ATB Cumberland Gap National Historical Park Silver coin is available from JM Bullion.

Missouri might be home to the St. Louis Arch, known as the Gateway to the West, but Kentucky’s Cumberland Gap is the original doorway to the West in America. The physical feature of the Cumberland Gab is a large, natural break in the Appalachian Mountains that created a more accessible route west from the nation’s original colonies.

Native Americans used the gap for generations as it was a natural migratory passage for numerous animal species. During America’s colonial past, settlers used the gap as a passage to the West. An estimated 300,000 settlers are believed to have used the gap between 1775 and 1810.

On the reverse side of all 2016 5 oz ATB Cumberland Gap National Historical Park Silver coins is the image of a settler, long rifle in hand, as he looks out over the Cumberland Gap. The phrase “First Doorway to the West” is engraved in the design, marking the early importance of the region in American history.

The obverse side features John Flanagan’s 1932 left-profile portrait of President George Washington. The image has graced the obverse side of US quarters for over 80 years now, and was based upon an original sculpture of the president made by William Cousins in 1786.

America the Beautiful Quarters are produced in both bullion and uncirculated versions by the United States Mint. The West Point Mint is the only facility in the system that does not contribute to production.

If you have questions, please reach out to a JM Bullion associate at 800-276-6508, connect with us online via live chat, or send us an email. If you are looking for similar products, be sure to view our collection of Uncirculated American Silver Eagles.

Terry from FL - August 03, 2016
"Outstanding experience. Previously did business with another company - now its ONLY JM Bullion. Super fast delivery and priced to sell to ALL. give them a try and be a lifelong customer."

Matthew from WV - May 25, 2016
"The only thing that would make this monster quarter better would be having a monster arcade game to put it in. When I'm in NV again I will find the JM Bullion building, walk up to it, and give it a big kiss! This coin will literally take up the entire palm of your hand. They will ship it in a hard, plastic capsule. It will be flawless. It will get to you in an insanely quick fashion. Shipping is free on all orders over $100. You won't find cheaper prices on anything JM Bullion offers so don't even bother looking. The only thing I can say negative about JM Bullion is that JM Bullion isn't in my town. I would picnic in front of the building every day if it were. Other than that, this company is awesome! This coin is awesome! Everything on their site is awesome. I'm a 44 year old man and every time I get on their website it takes me back to my childhood when I used to circle all the toys in the JC Penny catalog. I want EVERYTHING JM Bullion sells."