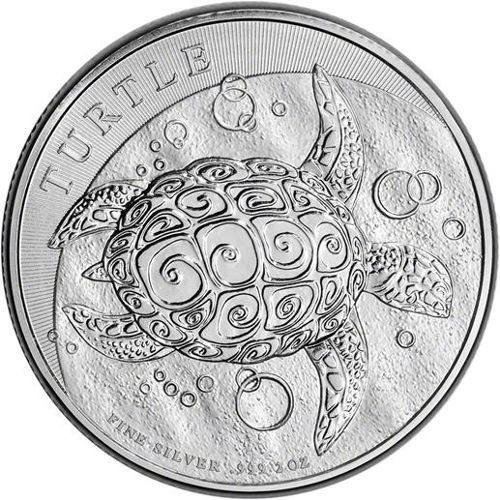 Log in to add In-Stock Alert
As low as $4.39 per oz over spot!
Add to WishlistLog In to add this product to your Wishlist
Free Shipping on $199+ Orders

The Niue Hawksbill Silver Coin is one of the increasingly popular coins available today in the precious metals industry. Originally introduced in 2010, today the consistent design of the coin and its brilliant inspiration, the hawksbill turtle, are highly sought-after by investors and numismatists alike. Right now the 2016 2 oz New Zealand Niue Hawksbill Silver Coin is available in BU condition from JM Bullion.

Niue Hawksbill coins originated from the New Zealand Mint in 2010 as the Fiji Taku silver coin. The coins were produced for the nation of Fiji until 2013, when political discord between the two nations led the Sunshine Mint to reissue the coins for the self-governing territory of Niue.

Each 2016 2 oz New Zealand Niue Hawksbill Silver Coin in this product listing has a Brilliant Uncirculated grade. BU coins exhibit no signs of wear and tear, but also feature breaks in the luster, spotted surfaces, or contact marks from striking.

On the reverse face of the coin is the image of a hawksbill turtle, with its unique overlapping shell pattern visible. The matte finish of the water gives the coins design contrast, and a sliver of mirrored finish along the side bears the engraving Turtle.

The obverse face bears the right-profile portrait of Queen Elizabeth II. On this side youll also find the engravings of Her Majestys name, the nation of issue, the year of issue, and the face value of the coin.

If you have questions, please contact JM Bullion at 800-276-6508. You can also contact us online using our live chat or email services. If you are interested in similar products, check out our selection of New Zealand Silver Coins.

Jason from FL - May 05, 2016
"I bought these when they were on sale from JMBullion's eBay store. Price can not be beaten. The coin itself is very impressive. It is still the same diameter (38mm) as the 1 oz coin, but it's double the thickness, very unique. I am very happy with my set of 5 coins. If you want to take a closer look, check out my unboxing from JMBullion... https://www.youtube.com/watch?v=J1GfWbSxh-E"

Charles from CA - March 06, 2016
"One of the better offers to buy silver close to spot. These lovely coins have matte finish for everything but the principals - Her Majesty, Elizabeth II, and this sea turtle, which are both in mirror (proof) detail. I like the heavier coins - Armenian, Mexican - and these. J.M. Bullion always ships promptly and with care. Looking forward to more exotic Rounds, coins, especially the 2016 Libertads. Thanks, all!"