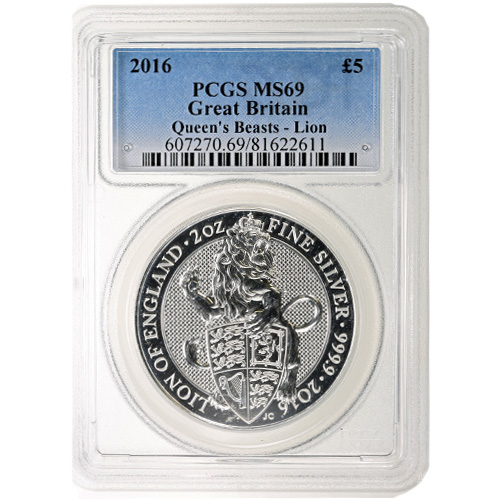 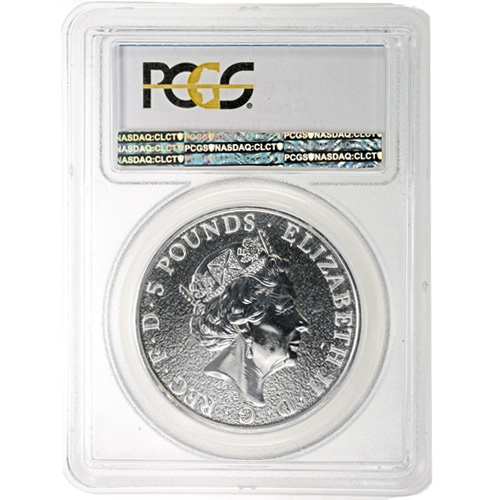 One of the newest bullion coin programs from the Royal Mint is a 10-coin series of Queen’s Beast silver and gold options. Inspired by the extravagant ceremony that saw Queen Elizabeth II crowned in 1953, the Queen’s Beast range features replicas on bullion coins of the statues present during her ceremony. Right now, the 2016 British Silver Queen’s Beast Coin is available from JM Bullion in near-perfect condition.

The lion has played a long role in the heraldry of England. Lions were first chosen by knights of the medieval time period as a symbol on their heraldic shield because of the bravery and prowess of the beasts. Today, the lion remains a pivotal creature in the heraldic imagery of the United Kingdom.

These 2016 British Silver Queens Beast Coin is the first release in a planned series of 10 coin designs from the Royal Mint. Each release represents one of the 10 animal statues present during the coronation ceremony for Queen Elizabeth II in 1953. Each release features a gold and silver version, with the 2016 British Silver Queens Beast Coin holding the distinction as the first-ever 2 oz. silver bullion coin from the Royal Mint.

On the obverse of each Queens Beast Coin is one of the first uses of the new right-profile portrait of Queen Elizabeth II. Her Majesty’s effigy is updated from time to time on British coinage to reflect her current age, and this design was created in 2015 by Jody Clark, the youngest artist to work on the portrait for the Royal Mint.

The reverse of all 2016 British Silver Queens Beast coins has the image of the Lion of England, which is depicted standing on its rear legs with one paw grasping the heraldic shield of the United Kingdom and another raised in the air, poised to strike.

Each 2016 British Silver Queens Beast Coin in this listing is a near-perfect product according to the PCGS. Coins in MS69 condition feature full, original mint luster, but also bear a maximum of two minor detracting flaws. These flaws are limited in scope to minuscule contact marks or hairlines.

If you have any questions about these Silver Queens Beast Coins, please don’t hesitate to ask. JM Bullion associates are available on the phone at 800-276-6508, online using our live web chat, and via our email address.

NICOLE from TN - November 10, 2016
"This coin is spectacular, and I plan to buy more in the ungraded version. I took advantage of the dip in silver prices and picked up one of these graded coins because it's the first one in the series, and there have been some quality issues reported. If you're on the fence, don't hesitate. This is a beautiful coin and well worth the premium!"