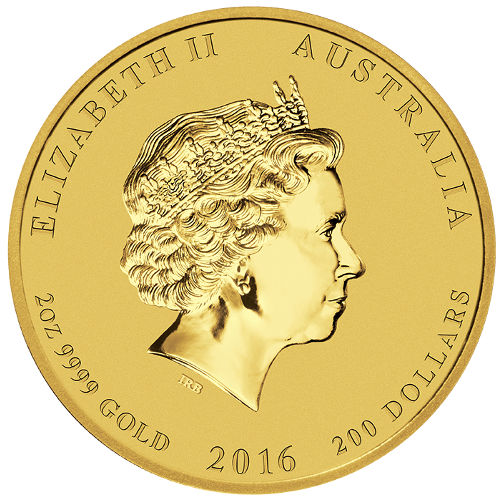 Lunar Series II coins are rolling out from the Perth Mint for the upcoming Year of the Monkey, and the 2016 design impresses once again. Part of a 12-year cycle from Australias oldest operating mint, the Year of the Monkey coins are available in silver and gold, with each version bearing a different reverse design. JM Bullion now offers the 2016 2 oz Australian Gold Monkey Coin in BU condition.

The Perth Mints Lunar Series II is the most popular lunar coin series in the world. Building upon the success of the original Lunar Series (1996-2007), the mint launched Lunar Series II in 2008 with all-new designs for each of the animals in the 12-year cycle.

2016 is the Year of the Monkey on the Chinese Lunar Calendar. Known as the Zodiac in English, or Shengxiao in Chinese, the literal translation of the concept is birth likeness. Those born under the sign of the monkey are said to be intelligent, confident, and fun-loving, just like the animals themselves.

The obverse image is that of Queen Elizabeth II. Her Majestys right-profile portrait was created in 1998 by Ian Rank-Broadley, and is featured in the center of the obverse. Surrounding the Queen are engravings that read Elizabeth II, Australia, the coins weight, purity, and metal content, as well as its year of minting and face value.

Perth Mint was founded in 1898 as the final of three British Royal Mint facilities in Australia. The facility remained in British control until 1970 when it was passed on to the state government in Western Australia.

JM Bullion welcomes any questions you might have about the latest Lunar Series II coins. You can contact us on the phone at 800-276-6508, connect with us through our websites live chat service, or email us. Please be sure to visit our Australian Gold Coins page if you are looking for similar products.