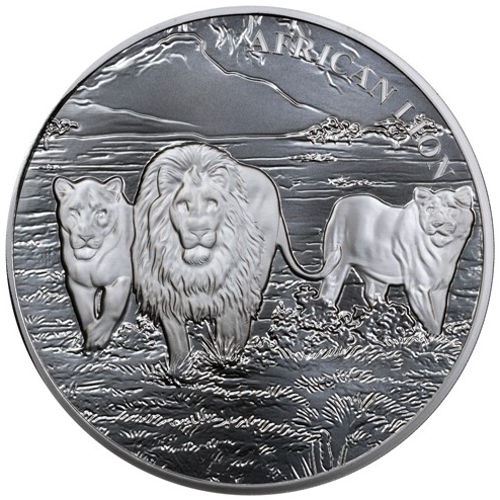 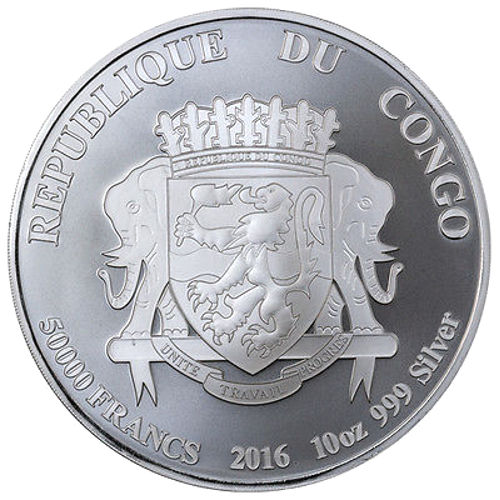 For 2016, in addition to expanding the 1 oz offerings to include gilded and proof specimens, these coins are now available in 5 oz, 10 oz, and 1 Kilo weights. The new weights feature the same basic design with enhancements that make use of the extra surface area of these larger coins.

On the obverse of the 2016 10 oz Congo Silver African Lion coin is the image of a male and female lion as they prowl the savanna for food. Included in the larger surface area of this coin you’ll find another female lion working with the pair, and the mountain in the background has more of its size and scope visible courtesy of the extra space.

The reverse of each 2016 Congo Silver African Lion coin bears the coat of arms for the Republic of Congo. In addition to the engravings of the nation’s full name, the face value of the coin, and its weight, purity, and metal content, you’ll find the crest of the Republic of Congo. Featuring a lion in the center of the shield, a pair of massive elephant heads prop up the shield on either side.

Each of these 2016 10 oz Congo Silver African Lion coins are in Brilliant Uncirculated condition. Coins with a BU grade exhibit no signs of wear and tear, but do feature minor blemishes such as breaks in the luster, spotted surfaces, or contact marks.

If you have questions, we encourage you to reach out to JM Bullion. Our customer service team is available on the phone at 800-276-6508, online using our live web chat service, and via our email address. Check out our full selection of Congo Silver Coins.