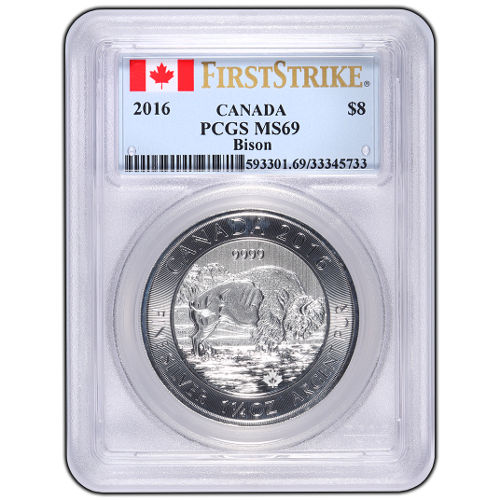 The most unique coin available in the world right now is the Canadian Silver Bison coin, the worlds only 1.25 oz silver bullion product. Introduced by the Royal Canadian Mint in 2015, the coin enters its 2nd year of production with increased attention and growing popularity. Today, JM Bullion offers the 2016 Canadian Silver Bison coin with a near-perfect grade and special designation.

Canadian Silver Bison coins were introduced for the first time in 2015, and the Royal Canadian Mint announced that the coins would include a new design honoring the bison on the reverse with each new production year. The bison is the largest land mammal in North America, and has roamed the continent since the Holocene era.

Each 2016 1.25 oz Canadian Silver Bison available today from JM Bullion earned a near-perfect grade of Mint State 69. The PCGS notes that a coin in this condition exhibits its full, original mint luster, but also includes a maximum of two minor detracting flaws.

As a First Strike coin, these products had to be received by the PCGS or an approved depository within the first 30 days of its release date, as set by the Royal Canadian Mint.

On the reverse face of the coin is the image of a massive bison, known as buffalo in the United States, standing in the shallow waters at the edge of a creek. Engravings on this face include Canada 2016 above, the purity of 9999, and the coins metal content and weight.

The obverse bears the familiar right-profile image of Queen Elizabeth II as designed by Susanna Blunt in 2003. The reverse design of the bison comes from artist Vanessa Miller. Both sides of the coin feature the Royal Canadian Mints latest security features, including micro-laser engraved radial lines and the maple leaf with the numeral 16 for the year of issue visible in the center under magnification.

Please feel free to contact JM Bullion at 800-276-6508 with any questions. You may also reach out to us online using our live chat and email features.