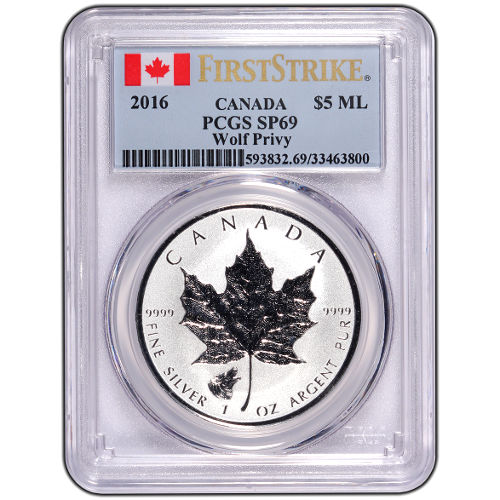 First and foremost, these coins are a unique Specimen Proof 69 product according to the PCGS. The grade 69 indicates the coins are near-perfect, with their full, original mint luster and a maximum of two minor detracting flaws. The SP, or specimen, title instead of PR (proof) indicates these coins are struck will like proof coins, but with a satiny, sometimes matte finish that has a semi-granular look.

Reverse proof coins feature appearances that are opposite of a traditional proof. In this case, the design fields of the Wolf Privy mark, the Maple Leaf, and Queen Elizabeth IIs portrait are mirrored and clear in nature, while the background field is strong and frosted. The First Strike designation indicates these coins arrived at the PCGS depository within the first 30 days of the release date set by the Royal Canadian Mint.

The Wolf Privy mark is part of a wilderness-themed Canadian Silver Maple Leaf series that will eventually include all six creatures used on the Canadian Wildlife Series of silver bullion coins. The privy mark is located to the lower left of the sugar maple leaf on the reverse side of the coin.

On the reverse youll find the sugar maple leaf design in the center, with the wolf privy below, and engravings identifying the coins nation of issue, purity, weight, and metal content. The obverse bears the right-profile portrait of Queen Elizabeth II used on all Canadian currency.

If you have any questions about these unique products, please dont hesitate to ask. Our associates from JM Bullion are standing by at 800-276-6508, and are also available online using our live web chat feature and email address.