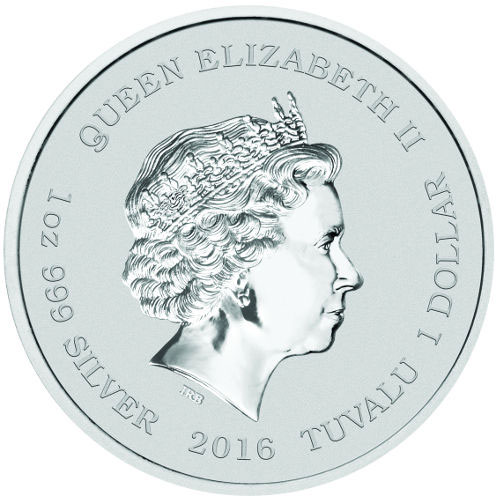 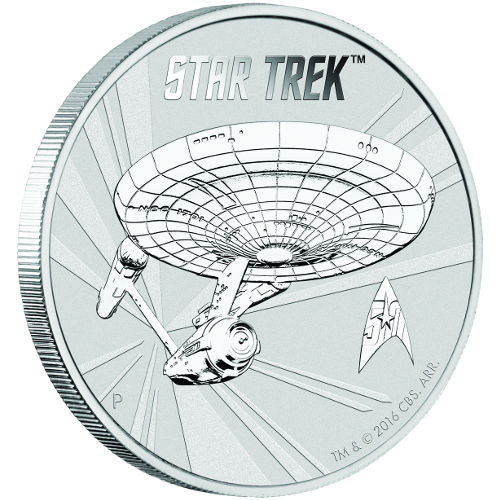 It is a very big year in 2016 for Trekkies. It was 50 years ago that Gene Roddenberry introduced the world to his Star Trek universe. What started as a short-lived US television series eventually grew to become a franchise that included five television series and 13 feature films. Now, JM Bullion offers the 2016 1 oz Star Trek USS Enterprise NCC 1701 Silver coin for sale online.

Star Trek debuted on American television in 1966 with what has become known as The Original Series. Although the series only lasted three years, it would eventually spawn a number of other television and feature film adventures, boldly taking viewers where no man had gone before.

In total, following the end of The Original Series‘ run on television, Star Trek gained a cult following with an animated series followed by a handful of feature films in the 1970s and 1980s. It wasn’t until the late 1980s and 1990s that Star Trek started to invade television sets again. Between 1985 and 2005, a total of four new series debuted on TV. In recent years, a reboot of the franchise has occurred with the release of new feature films.

These 2016 1 oz Star Trek USS Enterprise NCC 1701 Silver coins feature the image of the iconic starship from the starfleet. Captains, including James T. Kirk, sat at the helm of this beloved starfleet leading ship throughout the course of numerous installments of the series.

On the reverse side of the coin you’ll find the image of the USS Enterprise NCC 1701 in flight, along with engravings of its name and the mint mark. The obverse of the 2016 1 oz Star Trek USS Enterprise NCC 1701 Silver Coin features the right-profile portrait of Queen Elizabeth II. Her Majesty’s image was crafted in 1998 by Ian Rank-Broadley, and it represents the fourth-generation image of the Queen on commonwealth coinage.

These coins are the product of the Perth Mint. Located in Perth, Western Australia, the mint is the nation’s oldest operating mint facility and was once part of the British Royal Mint system. It remained under British control until 1970, but is now a state-owned entity of Western Australia and is not associated with the Royal Australian Mint.

If you have any questions about these Star Trek coins, please feel free to reach out to JM Bullion. You can contact JM Bullion customer service on the phone at 800-276-6508, or connect with us online using our live web chat or email features.

Christopher from MN - August 17, 2016
"There are really nice coins. I picked up a few, since I'm both a Silver Bug and a Trekkie fan. I also like the fact they already come in an air-tite like capsule and they are a lower mintage. They are more expensive then some coins, but as we all know, you get what you pay for. The appeal for collectors and low mintage should more then offset the initial investment going forward. JM Bullion is great as always!"

Ramagopal from AZ - July 25, 2016
"Great coin !!! Would have picked up more but for the premium. But JM Bullion has got the lowest Premium !!! As always JM Bullion has fast shipping..."