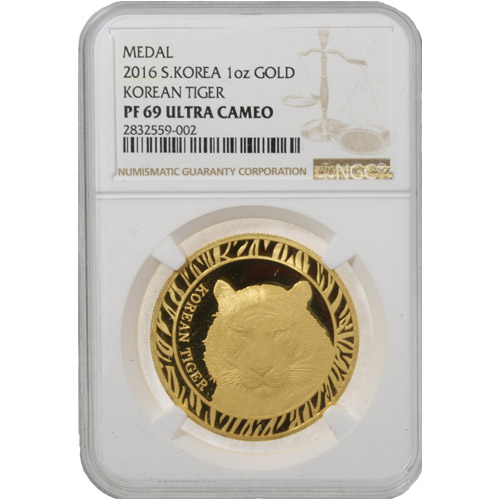 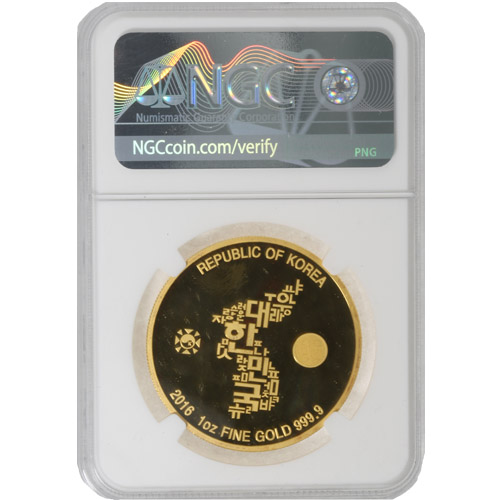 Each 2016 1 oz Proof South Korean Tiger Gold Medal in this product listing is packaged inside of a protective plastic slab by the NGC to ensure the continued quality of its PF69 grade. Medals in this condition are considered near-perfect and exhibit full, original mint luster with no more than two minor detracting flaws. Examples of acceptable flaws at this grade level include only minuscule contact marks or hairlines found outside the primary focal fields.

The included UCAM label in the slab stands for ultra-cameo and refers to the beautiful visual finish of the coin. Proof specimens with a UCAM label display strong, frosted design elements with deeply-mirrored, clear background fields.

On the obverse of 2016 1 oz Proof South Korean Tiger Gold Medals is the image of a tiger’s face staring at the viewer. The beast appears docile and calm with a blank background field behind it and jungle foliage within the outer design rim’s background.

The reverse side of all 2016 Proof South Korean Tiger Gold Medals includes the stylized depiction of the Korean peninsula. There is no delineation between North and South Korea visible. Instead, a unified peninsula is depicted using the letters of Hangul, the Korean alphabet.