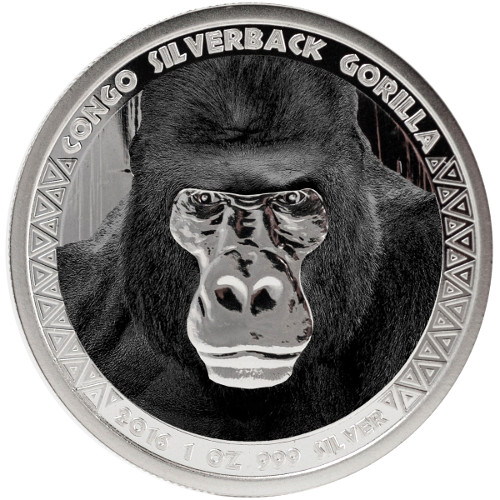 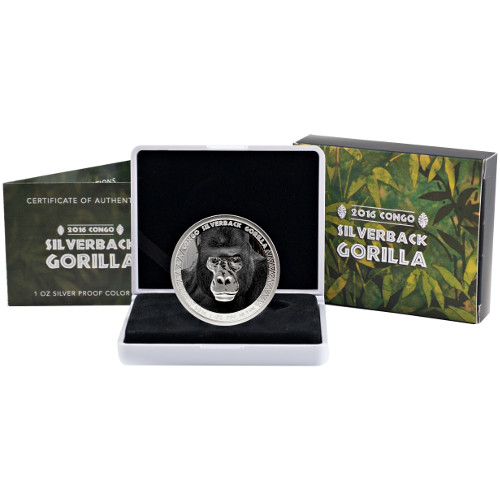 The Congo Silverback Gorilla silver coins from the Scottsdale Mint are some of the newest products in the world bullion market. Like many other annual release coins, these beautiful specimens feature the same theme each year with a slight twist on the design. Now theres a whole new twist with the addition of colorization to the design for proof minting. Today, the 2016 1 oz Proof Colorized Congo Silver Silverback Gorilla Coin is available from JM Bullion.

The gorilla lives in a family group, and the term Silverback Gorilla is used to describe the leading male in the group who often determine where the family eats and sleeps. The Democratic Republic of Congo is home to eastern lowland gorillas from the eastern gorilla species.

Each of these 2016 1 oz Proof Colorized Congo Silver Silverback Gorilla Coins features the dark, black colors of a male silverbacks face. It is a subtle addition to this coin, but one that adds value to the proof striking.

The obverse of the Proof Colorized Congo Silver Silverback Gorilla coin features the 2016 exclusive design for the coin series, a close up view of a male silverbacks face with the addition of black coloring to his fur.

On the reverse is the coat of arms for the Republic of Congo. Engravings on this face include the face value and nation of issue, with the latter engraved in the native French tongue of the nation.

The Scottsdale Mint is a private minting facility located in the Phoenix, Arizona suburb of Scottsdale. This is the mints first sovereign coin program. A significant portion of silver bullion used by Scottsdale in its production process is recovered from other industries, such as manufacturing.

Please feel free to reach out to JM Bullion with any questions by calling us at 800-276-6508, chatting with us live online, or sending us an email.