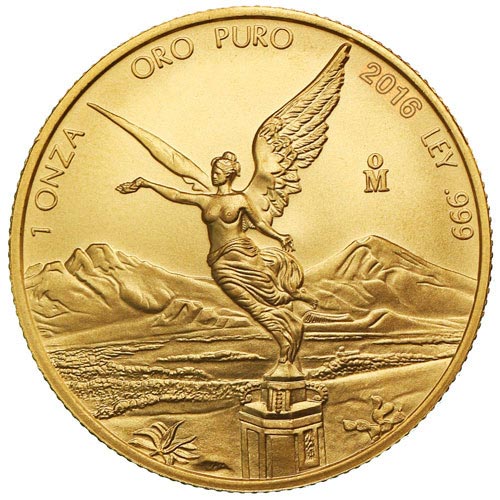 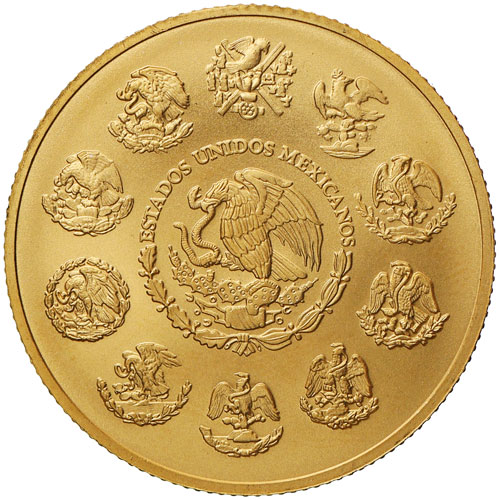 The gold Centenario coin was released in 1921 on the 100th anniversary of Mexican Independence from Spain. The coin featured the image of Winged Victory, front-facing, on the obverse and the coat of arms on the reverse.

These coins were released by the Mexican Mint in conjunction with the erection of a statue in Mexico City of Winged Victory, along with other national celebrations of the centennial. When the Mexican Mint launched a new bullion coin program in 1981/82, the Mexican Gold Libertad was the first coin available and it featured those same iconic images from the Centenario coin.

Each 2016 1 oz Mexican Gold Libertad Coin in this product listing from JM Bullion is in BU condition. Coins in BU condition have no signs of wear and tear, however you may notice minor flaws in the coin such as breaks in the luster, spotted surfaces, and contact marks from the striking of blanks during production.

On the obverse of the Mexican Gold Libertad coin is the image of Winged Victory, which dominates the center of the design field and is framed in the background by the twin volcanic peaks of Popocatepetl and Iztaccihuatl, which are named for a pair of Ancient Aztec lovers.

The reverse of all 2016 1 oz Mexican Gold Libertad coins includes the modern coat of arms for Mexico in the center of the design field, with surrounding images of all 10 historic versions of the seal used by the nation since 1821.

Founded in 1535, the Mexican Mint is the oldest in the Western Hemisphere and once struck colonial coinage for Spanish Empire colonies throughout the Western world. Today it is the sovereign mint of Mexico and is overseen by Banco de Mexico, the nation’s central bank.

If you have any questions, please feel free to contact JM Bullion’s customer service team on the phone at 800-276-6508. You can also reach out to us online using our live web chat and email features.