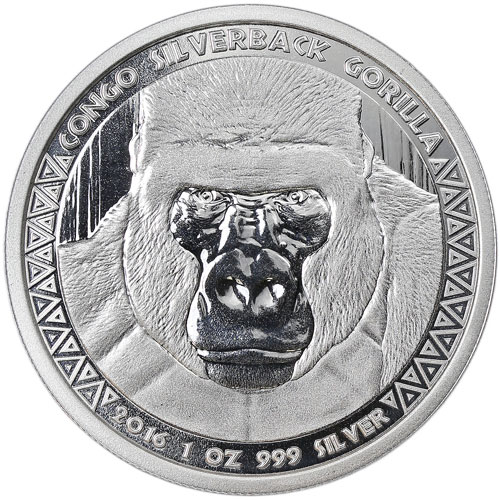 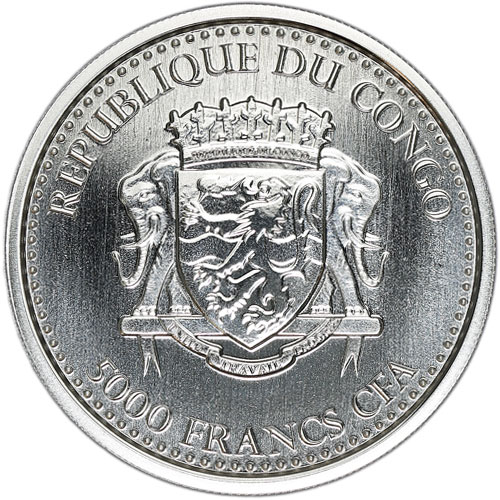 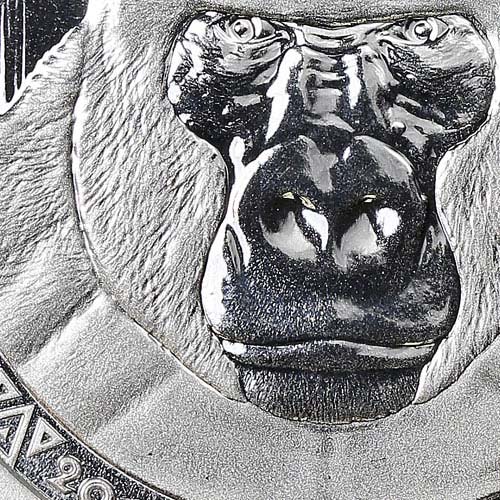 The second release in the annual Congo Silverback Gorilla series is now available from the Scottsdale Mint, and it features a brilliant proof-like finish. The Gorilla is one of the most mysterious of ape species. JM Bullion is proud to offer the 2016 1 oz Congo Silver Silverback Gorilla coin for purchase online today.

Scottsdale Mint contracted with the government of the Republic of Congo in 2015 to strike an annual coin series featuring one of the nations most famous residents; the Silverback Gorilla. After an inaugural release in 2015 that featured just 50,000 coins, mintage has been increased for 2016.

Gorilla is a broad species term that actually encompasses two different species and four to five subspecies. The Republic of Congo is home to the eastern lowland gorilla, which lives in the dense forests and lowland swamps or marshes along the nations border with Rwanda.

Each 2016 1 oz Congo Silver Silverback Gorilla coin features a new design for the series. The annual program will include new obverse imagery each year, though it will always focus on the coins namesake gorillas. These proof-like specimens have mirrored finishes with some degree of frost on the designs.

The obverse of the Congo Silver Gorilla coin features the up-close image of a Silverback Gorillas face as it stares back at you. Engravings include the series name for the coins along the top, with the year of issue, weight, purity, and metal content along the bottom.

On the reverse of the 2016 1 oz Congo Silver Silverback Gorilla coin is the image of the coat of arms for the Republic of Congo. Engravings at the top of this side include the nations name in the French language, and the coins face value is featured below.

The Scottsdale Mint is a private minting facility located in the Phoenix, Arizona suburb of Scottsdale. This is the mints first sovereign coin program. A significant portion of silver bullion used by Scottsdale in its production process is recovered from other industries, such as manufacturing.

Please feel free to reach out to JM Bullion with any questions by calling us at 800-276-6508, chatting with us live online, or sending us an email. To see similar products, check out our full selection of Congo Silver Coins.

Anthony from - May 24, 2019
"These are very cool! Limited issue silver coins for the red pill alpha male straight from the Congo baby! Every real man should have 1!"

Michael from MO - June 03, 2017
"King Kong, the sequel has arrived. Now playing at JM Bullion everywhere. I rate this fine specimen coin higher than the Empire State Building. Bought to you by JM Bullion and The Scottsdale Mint. Rated EX-cellent."

Daniel from PA - November 30, 2016
"Great coin and great service from JM. Love that I am able to start collecting this coin from the inaugural year (2016). Thanks again for such a wonderful buying experience."

Mary from CT - August 25, 2016
"These Silverback coins are incredible. Their alpha male power will draw anyone in...if you dare! I loved the 2015, too. The intimidating gaze really stands out strikingly this year.They make great gifts that will be remembered for the alpha males in your life."