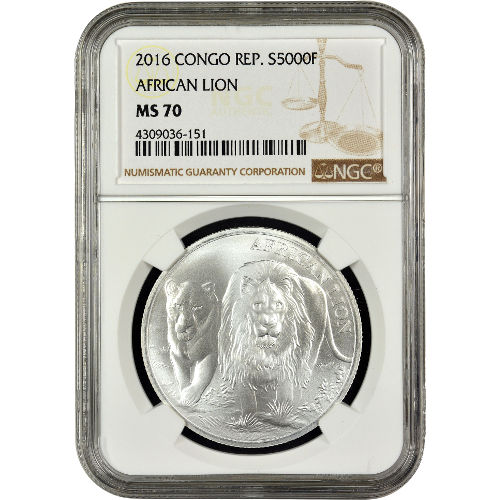 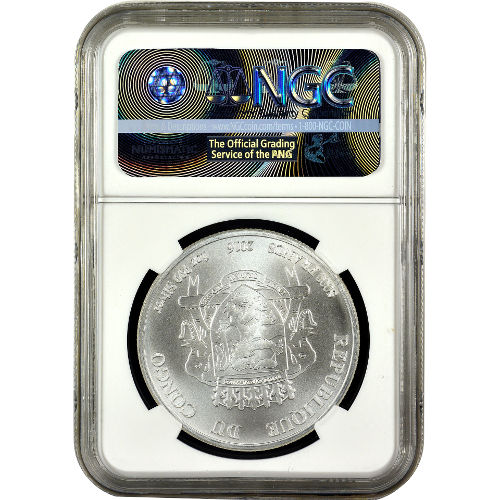 The 2016 Congo Silver African Lion is the continuation of a program that began in 2015 for the nation of Burundi. Bearing the name African Lion Series, these coins are designed to feature new images of the African lion on the obverse face. Once found throughout the continent, interference from mankind and dwindling food supplies threaten the survival of the lion long term on the continent.

Each of the 2016 1 oz Congo Silver African Lion coins in this product listing earned perfect certification from the NGC. You’ll find the full, original mint luster on these coins and no detracting flaws of any kind.

The obverse bears the image of a male and female lion from the pride as they track their prey. In a lion pride, the male provides protection for the family while females do the majority of the hunting to support the lions and cubs.

On the reverse is the coat of arms for Congo, along with engravings that include “Republique du Congo” above the design and the coin’s weight, purity, metal content, year of issue, and face value below.

Sunshine Minting is a privately-owned facility in the state of Idaho that contracted with the Republic of Congo to strike these coins. The coins are limited to a total of 50,000 bullion coins in 2016.

Please direct any questions you might have to a JM Bullion associate at 800-276-6508. You can also connect with us online using our live chat and email features. If you are interested in similar products, be sure to check out our full selection of Congo Silver Coins.