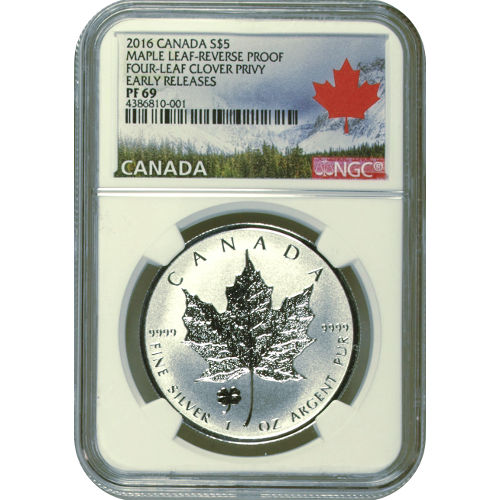 The four-leaf clover is often viewed as luck in its own right, but in reality there is a different meaning for each of the four leaves of the clover. Tradition states that the first leaf is for faith, the second for hope, the third for love, and the fourth is for luck, hence the belief in four-leaf clovers being lucky.

Each 2016 Four Leaf Clover Canadian Silver Maple Leaf coin in this listing is considered near perfect by the NGC. Coins with a PF69 grade have full, original mint luster and a maximum of two minor detracting flaws.

Reverse proof coins feature a strong, frosted finish to the background field and a deeply-mirrored, clear finish on the design sets. In this way, a reverse proof is opposite of the visual appearance of a standard proof coin.

On the reverse of each coin you’ll find the iconic sugar maple leaf design from the RCM, with a small four-leaf clover privy in the lower-left field. The obverse side of the coin features the 2003 depiction of Queen Elizabeth II created by Susanna Blunt and featured on all Canadian coinage.

If you have any questions about this coin, please feel free to contact JM Bullion at 800-276-6508. You can also connect with us online using our live web chat or email features.