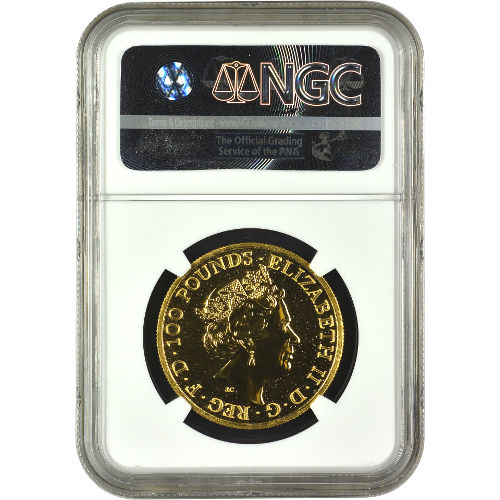 The first release of an exciting new series of coins from the Royal Mint is now available with certification from one of the worlds best grading services. British Gold Queens Beast coins celebrate the 10 creatures present in sculpture form when Queen Elizabeth II ascended to the throne of England over 60 years ago. The 2016 1 oz British Gold Queens Beast Lion Coin is now available with a perfect certification from JM Bullion.

The Barbary lion is the national animal of England, and officially appeared in the heraldry of the British Royal Family in 1707. Historic depictions of the Royal Coat of Arms for the family included three lions. This depiction and the phrase three lions is still used today in Royal Arms, as well as national sports teams.

Many of Englands previous rules dating back to the High Middle Ages have had the nickname of Lion as part of the medieval warriors reputation for bravery. Chief among these was Richard I of England, better known as Richard the Lionheart who lead the nations efforts in the crusades in the Middle East.

Each of these 2016 1 oz British Gold Queens Beast Lion Coins is available with a perfect grade from the NGC. Coins in MS70 condition exhibit full, original mint luster and feature no detracting flaws of any kind on the surfaces.

The British Queens Beast Series debuted in 2016 with the release of the Lion of England design from Jody Clark, the Royal Mints youngest and newest artist/engraver. In total, 10 designs are scheduled for release, with each representing an animal present as a statue when Queen Elizabeth II was officially crowned Queen of England in 1953.

On the obverse of each 2016 1 oz British Gold Queens Beast Lion Coin is the image of Queen Elizabeth II. Clark, at 33 years old, is the youngest artist to ever create the right-profile portrait of Her Majesty, with his new design unveiled in July 2015.

The reverse of these British Gold Queens Beast Lion coins feature the Lion of England design, which includes the heraldic Lion standing proudly on its hind legs. It holds the heraldic shield of the nation in one paw while raising the other to strike out at the nations enemies.

Please direct your questions to a JM Bullion associate at 800-276-6508, connect with us online through our live web chat, or send us an email.