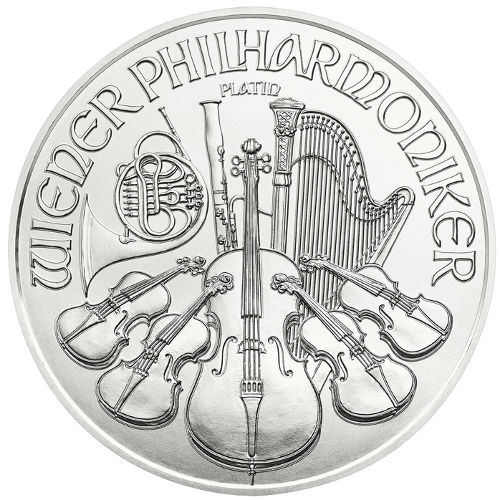 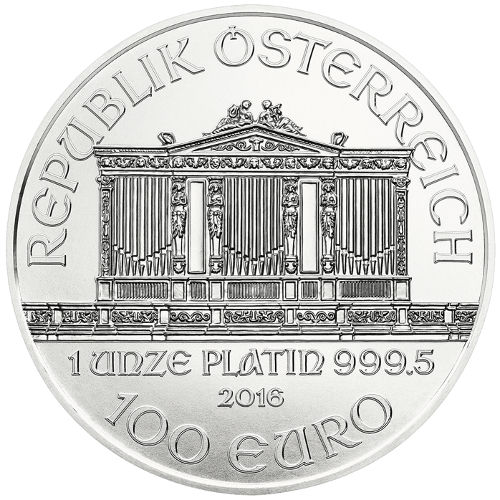 Each of the 2016 Austrian Platinum Philharmonic coins in this listing have a Brilliant Uncirculated grade. Coins in BU condition show no signs of wear and tear, but might exhibit detracting flaws such as breaks in the luster, spotted surfaces, or contact marks.

On the obverse face of the coin is the image of the pipe organ found within the Musikverein concert hall. Also known as the Golden Concert Hall, this is the home theater of the Vienna Philharmonic orchestra and is located in the Innere Stadt neighborhood of Vienna.

The reverse face of the coin bears a cornucopia of instruments used by members of the orchestra, including a French horn, bassoon, and cello, among others. Head Engraver of the Austrian Mint, Thomas Pesendorfer created this design for the gold version of the coin in 1989, and it continues in use today on the all-new 2016 Austrian Platinum Philharmonic coin.

Founded in 1194 by Duke Leopold IV, the Austrian Mint is one of Europe’s oldest refineries. It is one of the handful of mints in the Eurozone authorized to produce the common currency of the economic bloc, the Euro. While Austrian Philharmonic coins have Euro face values, but are not considered legal tender outside of Austria.

If you have any questions for a JM Bullion associate, please feel free to contact us on the phone at 800-276-6508, or reach out to us online using our live web chat feature or email address. If you are interested in similar products, be sure to check out our selection of Platinum Coins.