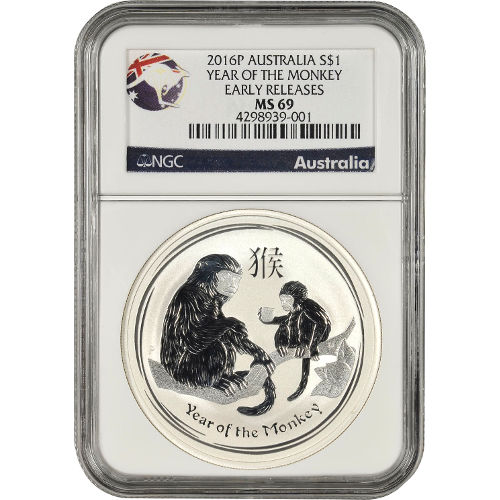 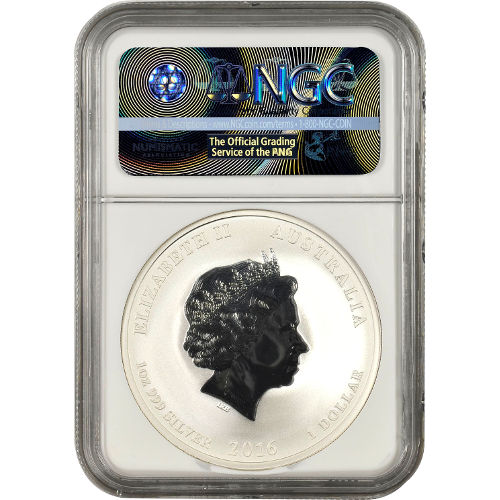 The Perth Mint is the home of the most coveted Lunar Series coins in the world. While many mints and refineries have followed suit with the production of lunar-inspired coins, the Perth Mints Lunar Series II coins are still the standard for excellence in the marketplace. Today, JM Bullion offers the 2016 1 oz Australian Silver Monkey coin in near-perfect condition for a limited time.

Each of the 2016 1 oz Australian Silver Monkey Coins in this JM Bullion product listing earned a Mint State 69 grade from the NGC. This indicates that the coin has its full, original mint luster, with a maximum of two minor detracting flaws visible on its surface.

As part of the Early Release series of coins, these Australian Silver Monkey products were packaged and shipped to an approved NGC depository within 30 days of issue. The grade and series of these coins adds inherent value to each individual coin.

On the obverse face of each coin youll find the right-profile portrait of Englands Queen Elizabeth II. Designed in 1998 by Ian Rank-Broadley, it is the fourth-generation image of her majesty to appear on Australian currency.

The reverse features the latest Lunar Series II coin design from the Perth Mint. Different than the design on the gold version, these Australian Silver Monkey coins feature an adult monkey sitting in a peach tree with a younger monkey, which holds a peach in its tiny palm. Engravings include Year of the Monkey and the Chinese symbol for monkey.

Australias Perth Mint is the oldest operating facility in the country. Located in Perth, Western Australia, it is a state-owned entity of the local government and is not associated with the sovereign Royal Australian Mint. Its products do, however, enjoy legal tender status under the Currency Act of 1965.

If you have any questions, please feel free to call JM Bullion at 800-276-6508. Our associates are also available online using our live web chat or email services. If you are interested in similar products, check out our selection of Perth Mint Silver Coins.